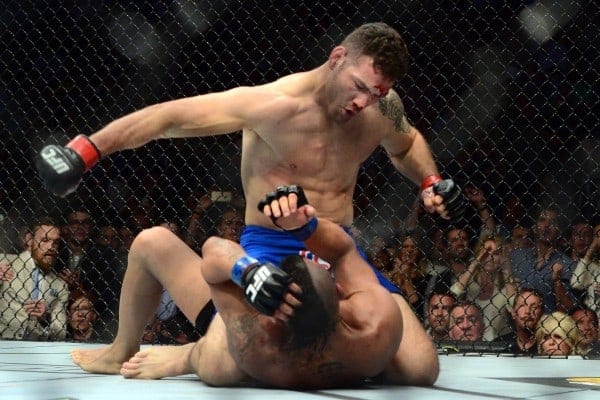 After a series of disappointing injuries and setbacks, UFC middleweight champion Chris Weidman finally silenced his doubters by defeating his archenemy Vitor Belfort in the co-main event of last night’s (Sat., May 23, 2015) UFC 187 from the MGM Grand Arena in Las Vegas, Nevada.

But it wasn’t without its fair share of adversity, as Belfort capitalized on an early rush by Weidman to nail him with a huge body kick and a flurry of uppercuts to both the body and face, wobbling and bloodying the champion. A finish was within sight, yet Weidman showed the heart of a true champion, turning the tables with a textbook takedown to mount and batter the legendary vet with a nonstop barrage of ground and pound (42 shots in all) that finally forced Herb Dean to step in and earn the stoppage.

It was another defining performance from Weidman, who’s now beaten three straight Brazilian legends as a top three-ranked pound-for-pound fighter in the world. The future is littered with new and exciting bouts for the grinding champion, and he just has to stay healthy. Check out the full fight video highlights of Weidman’s latest win below: