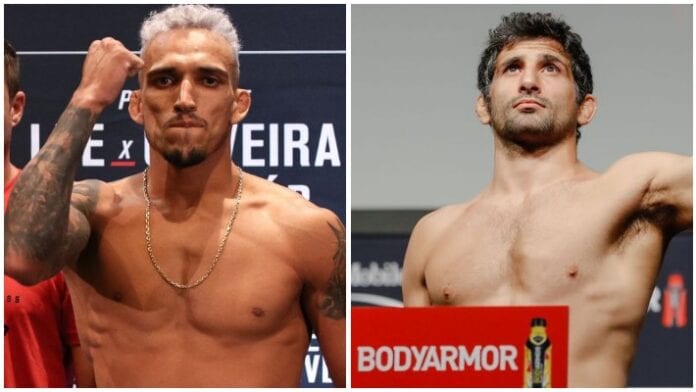 Surging lightweight contenders Charles Oliveira and Beneil Dariush are set to square off on October 3. AG Fight first reported the news which was later verified by MMA Junkie. The fight has not yet been officially announced but is expected to take place on Yas Island in Abu Dhabi.

Oliveira is currently riding a seven-fight winning streak which have all come inside the distance. Last time out he got the biggest win of his career when he submitted Kevin Lee in the UFC Brasilia main event. The #6 ranked lightweight fighter has since been calling for fights against the likes of Tony Ferguson and Dustin Poirier. However, it now appears the Brazilian will be made to wait for the big-name fights and must first stretch his win streak to eight by beating the #14 ranked Dariush.

Since suffering a shock upset against UFC newcomer Alex Hernandez in 2018 Dariush has been on a tear. The American-Iranian fighter has won five straight. Dariush has picked up impressive wins over the likes of Thiago Moises and Drew Dober. Last time out he knocked out Scott Holtzman with a spinning backfist at UFC Fight Night: Lewis vs. Oleinik.

Who wins on October 3? Charles Oliveira or Beneil Dariush?