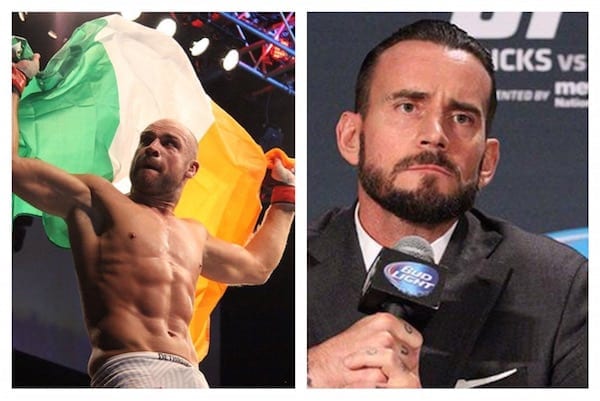 WWE (World Wrestling Entertainment) crossover CM Punk has come under fire from many established UFC stars since transitioning to the world of mixed martial arts. Yet to debut for the promotion, there are plenty that have questioned his ability to hang at even the lower level of the UFC’s talent pool, given the fact he’s never actually been in a sanctioned fight outside of pro-wrestling.

There’s been hoards of speculation regarding the wrestling star’s first UFC opponent, but nothing has really stuck to this point. Until last week that is, when a beef with Irish welterweight star Cathal Pendred began. A training partner of Conor McGregor at SBG (Straight Blast Gym), Pendred recently experienced his first UFC loss, a split decision against John Howard at UFC 189, and has since been booked to face Tom Breese at UFC Fight Night 76.

To the case in point; the Irish Boston native called out Punk for his skills on the pads, and Phillip Brooks (real name) was not too happy. Since that day, a back-and-forth feud has been boiling and Pendred tells Ariel Helwani that it was never actually meant to turn out that way:

“I didn’t even call him out last week, I put out a tweet with a short clip of him hitting pads, and I didn’t use his Twitter handle or tag him in it or anything. I just put the video up. And you know me, as the Irish say, I’m always having a little bit of ‘craic.’ I was actually more wrecking the piss out of myself than I was CM Punk. Everyone knows my stand-up hasn’t looked too beautiful since my UFC career started. And I just said, look at this guy, he makes me look like Muhammad Ali hitting the pads. So, I was actually just insulting myself in a half-hearted way.”

Regardless of motive, the Tweet sent out has earned Pendred a rival in Brooks, in a fight that would seem rather fitting in all honesty. The Irishman goes on to describe how he feels the pro-wrestling crossover is handling the pressures of being a fighter:

“I genuinely feel like he’s responding to me just because he feels that he might have a shot, or else he feels like he could maybe at least not die in there with me,” he said. “I’ve seen in a lot of his interviews since he joined [the UFC], he looks more scared now than he did — I think he looks more unsure of himself now than he did when he first decided to do this. I think he’s in the gym now and he’s having a hard time and he’s realized, I bit off more than I can chew now.”

“My striking has looked atrocious in the UFC so far, and that’s the type of guy I am,” he said. “I have no problem ripping it out of myself. But [CM Punk’s footage] made me look good. I’ve seen boxercise classes where people were hitting the pads better than that.”

Cathal Pendred and CM Punk’s rivalry lays the foundations for an interesting bout, especially seeing as the Irish fan favorite has already got a decent UFC record. In terms of potential opponents for Brooks, Pendred believes he is the top of the pack:

“I actually think that I’m in the pole position for it now because, nearly every guy in middleweight and welterweight has called the guy out, and he hasn’t responded to any of them. I reckon he thinks Pendred is the way to go, and if that’s the way he wants to go, there’s a couple of hundred thousand reasons I think it will be the way to go, too.”

With the way things are going, and with his lack of storylines elsewhere, CM Punk will likely be getting Cathal Pendred as his debut fight.