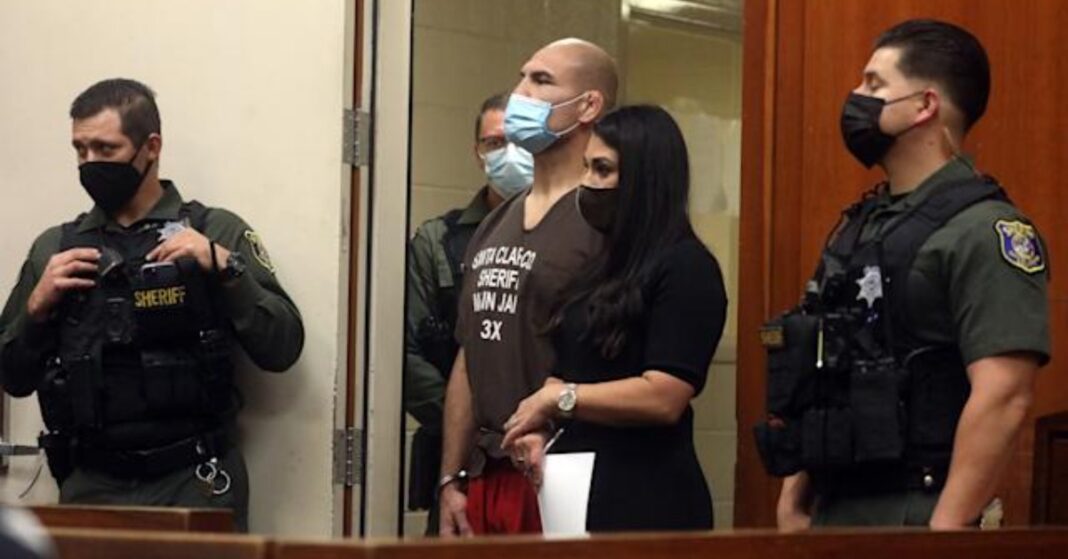 Former UFC heavyweight champion, Cain Velasquez has been denied bail by sitting judge, Shelyna Brown this Monday evening following his arraignment in Santa Clara, California, and will remain in custody ahead of his next hearing on April 12. next.

Per a report from MMA Fighting reporter, Damon Martin, Velasquez was denied bail by a sitting judge, with his hearing set for April 12.

“Cain Velasquez has been denied bail by the judge in Santa Clara county. He will remain in custody. His next hearing will be April 12.”

A further report by MMA Junkie reporter, Nolan King detailed how Judge Brown described the risk of allowing Velasquez bail as “too great”.

“Former UFC heavyweight champion Cain Velasquez has been denied bail. Judge Shelyna Brown says “the risk is too great” after reviewing Velasquez’s “reckless” alleged actions. He will be due back in court April 12.”

Velasquez, 39, was charged with premeditated attempted murder on Wednesday last week, after he is alleged to have shot in the direction of 43-year-old, Harry Eugene Goularte, an accused child molester who had been accused of molesting a minor, close relative of Velasquez “100 times”.

Reports emerged last Monday that Velasquez had been arrested on suspicion of attempted murder following an alleged shooting on February 28. in Morgan Hill, California, where another male was shot “at least once” and required transport to a medical facility where his injuries were described as “non-life-threatening”.

Amongst his charges confirmed by the district attorney last Wednesday, Velasquez is also facing one count of both assault with a firearm, and assault with a dealing weapon, where he is alleged of engaging in a high-speed car chase with a vehicle containing the aforementioned, Goularte, his stepfather, and mother – allegedly shooting Goularte’s stepfather in the arm during the incident.

In the days following Velasquez’s arrest and subsequent charge with premeditated, attempted murder, a slew of both past and present mixed martial arts offered both financial and moral support to the former two-time undisputed heavyweight champion, with UFC middleweight champion, Derek Brunson donating a sum of $10,000 to Velasquez’s family.

UFC color commentator, Joe Rogan also addressed Velasquez’s arrest prior to his return to the commentary booth at UFC 272 on Saturday, claiming that his only wish regarding the alleged incident, was that Velasquez had beaten the accused molester, Gourlarte to death, rather than brandishing and firing a .40 handgun during the alleged incident last Monday.