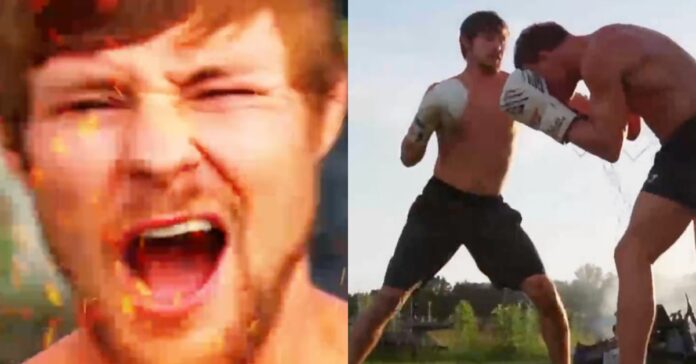 Ahead of his upcoming Octagon return in an end-of-year clash against fellow featherweight division standout, Ilia Topuria at UFC 282, Bryce Mitchell has dropped a new rap song and pairing video promoting the clash – as well as appearing to point at the issue of fighter pay within the organization.

For Topuria, the German-born featherweight contender has been sidelined since March to boot, making a brief lightweight excursion against Jai Herbert at UFC London, turning in a spectacular second round one-punch knockout win.

Expected to headline an event earlier this month against fellow undefeated featherweight grappler, Movsar Evloev, Bryce Mitchell saw the bout shelved after the former suffered an undisclosed injury back in October, scrapping the bout.

Releasing a new rap song to promote his end-of-year UFC 282 clash with Topuria – as well as explaining how he’s “frugal” with his earnings, given the fact he does not earn a lot.

“I hop on the saddle, I ride into battle, I took lots of hits so you know I’m not fragile,” Byrce Mitchell raps in a short snippet on his official Twitter account. “Fightin’ real brutally, make it look beautifully, really ain’t new to me, do this sh*t usually. I don’t get paid much so I spend it real frugally, praise be to God there ain’t sh*t you can’t do to me.”

In the midst of six-fightht winning run since his Octagon tenure began back in July 2018, Bryce Mitchell has landed other notable wins over the likes of Charles Rosa, and Andre Fili – as well as landing a rare twister submission win over Matt Sayles.