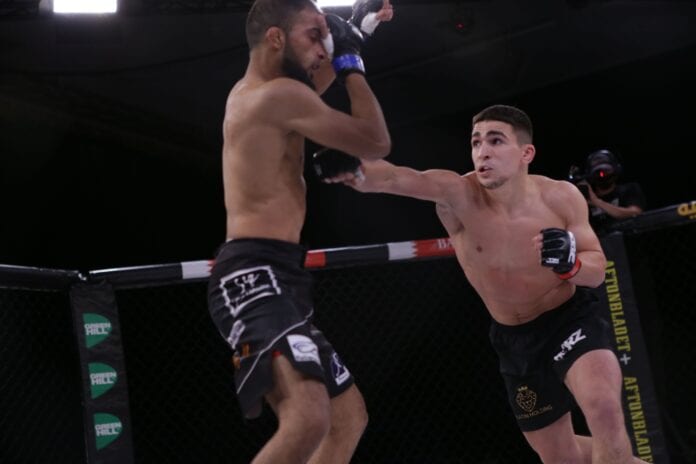 In the main-event, Chechen-Austrian Machaev faced the toughest test of his career in the UK’s Shoaib Yousaf. The 20-year-old Machaev was always going to have the upper hand on the ground, but how would he cope with Yousaf’s striking? Perfectly well, was the answer to that question.

Machaev was as confident on his feet as he was on the mat, with the first round being a predominately stand-up affair. Surprisingly, it was the British fighter who, unsuccessfully, went looking for the first takedown of the fight.

The opening of the second-round saw Machaev begin to assert his dominance, with Yousaf unable to overcome his opponent’s superior grappling abilities. The third-round continued where the second left off, with Yousef unable to handle Machaev’s constant takedowns. When the final horn sounded, Machaev earned himself a clean sweep of 30-27 from all three judges.

In the co-main event, Sweeden’s Anton Turkalj and Austria’s Ibo Aslan finally got the chance to lock horns after almost coming to blows during the weigh-in. The pair faced off in a 216 lbs catchweight bout.

The two undefeated fighters traded insults as the announcer called their names out, and as soon as the bell rang, it did not take them too long before they started firing off some heat. Aslan, who came into this fight with eight first-round wins under his belt, went looking for the early finish and had some initial success, landing several heavy shots that caused Turkalj problems.

However, the Austrian ran out of energy in the second round. After weathering the early storm, Turkalj demonstrated why he is rated so highly by the BRAVE CF matchmakers. He impressively took Aslan down, unleashed some ground and pound before taking the Austrian’s back and locking in a rear-naked choke.

It was a good night all round for Swedish MMA. Turkalj’s compatriot David Jacobsson scored a straight foward first-round stoppage victory over Romania’s Corneliu Lascar in their welterweight clash. It was the second straight win in a row for Jacobsson, who made his second appearance in the BRAVE cage, after earning a split decision win over fellow countryman Dilmurod Movlonov at BRAVE CF 38.

BRAVE CF will now return to his home base of Bahrain. The promotion will stage three consecutive events starting with BRAVE CF 41 on September 17.