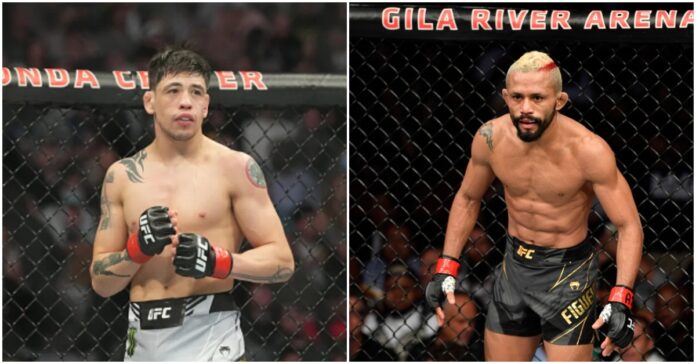 Brandon Moreno has declared he is skeptical of former opponent Deiveson Figueiredo’s injury claim which ruled him out of a fourth fight between them.

Following the trilogy bout between Moreno and Figueiredo, it was even, with both holding a win and their first meeting ending in a draw. So it was expected for the fourth bout to be booked sometime this year to finally declare a winner to their epic rivalry.

However, it came as a surprise to some when the UFC announced that Brandon Moreno instead face Kia Kara-France for the interim title on July 30 at UFC 277

The fight had fallen through as Figueredo stated that he would not be able to begin training camp until he had fully healed from multiple hand injuries; stating he would eye an end-of-year return.

‘The Assassin Baby’ doesn’t believe the Brazilian’s excuse, however, and in an interview with MMA Junkie in Spanish, he didn’t hold back.

“Look, anyone can make their own conclusions, but what I think is that he’s been making excuses since the beginning and he hasn’t stopped,” Moreno said. “He even tried to say I’m racist and those type of things. I feel like after that didn’t work for him, he had no choice but to say I’m injured and I can’t fight.

“Not to make a whole thing out of it, but he was ready to fight me this past pay-per-view event in May (UFC 274), but he asked for a lot of money and UFC denied him. That’s when the excuses started. If the guy is truly injured, speedy recovery, all the best to him. But if he’s not, I think a lot of people are thinking the same thing. So I don’t know, I think it’s very cowardly from his part, but whatever.”

Moreno also said that he feels that Figuerdos’s team is letting him down, “If he’s listening to people around him, I think they’re self-sabotaging him bad, very bad. And that’s the problem when you get together with people who think they know it all.”

UFC 277 is just over a couple of months away and the former champion, Moreno, has a formidable test in front of him. Kara-France has seen his stock rise as of late, coming off an impressive three-fight win streak over Rogerio Bontorin, Cody Garbrandt, and Askar Askarov.

Do you think Brandon Moreno is right, is Figueiredo faking it?