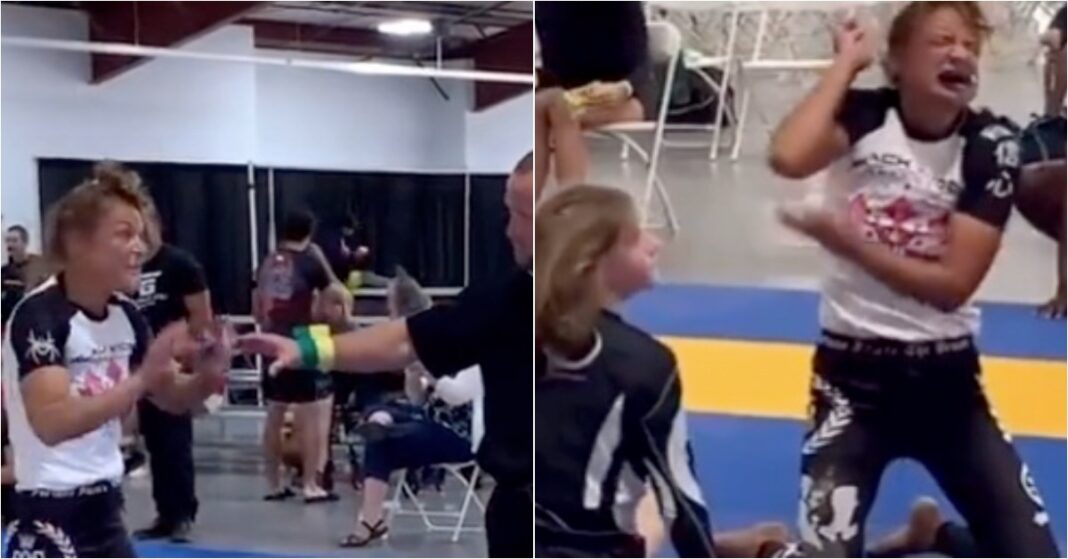 Footage has emerged of a Brazilian Jiu-Jitsu grappling match featuring an elder competitor criticizing her younger opponent for not letting go of a submission following a tap, after she initially shoved her in the face.

In footage posted by Twitter user, @mma_mami, a practitioner sporting a white rashguard and black spats, shoves her younger opponent who is sitting on the mat, to her back, courtesy of a shove to her face.

Latching onto quite an awkwardly positioned armbar, the younger competitor eventually forces a tap, however, the elder practitioner immediately warns her, “when I tap, let go” whilst wincing in pain and shaking out her right arm.

As the two return to the center of the match as the referee raises the arm of the victor, the elder competitor reiterates her sentiment: “You have to learn to tap (sic) – when I tap, let go.”

With the aforenoted Twitter user questioning the legality of a shove to the face in BJJ grappling competition, Invicta FC atomweight contender, Jillian DeCoursey confirmed that a shove in a BJJ match was “perfectly legal” before claiming the elder competitor was just upset that she had been “schooled” by her younger adversary.

“It’s perfectly legal,” DeCoursey tweeted. “As far as the other stuff? That’s the adult acting like a child. Often you don’t feel the tap or realize it’s a tap. The young lady did nothing wrong, she let go when the ref recognized the tap. That’s a woman being upset she got schooled by a “kid”.”

In what appears to be a second BJJ match between the two, the younger competitor once again locks up an armbar, this time from full guard, however, the elder practitioner taps once more, but appears to strike the offensive grappler twice in the midsection, before shaking out the same arm in pain and refusing to let the official call a halt to the match and award the win to her opponent.