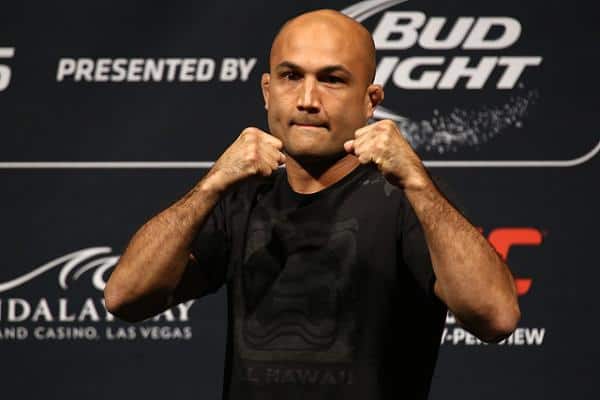 Recently guaranteeing that he would make his comeback at March 5’s UFC 196, it appears as if the plan has now changed.

Speaking with his own BJPenn.com, “The Prodigy” said that he and the UFC have agreed that returning at April 23’s UFC 197 would make more sense for all parties involved:

“I thought the fight guaranteed was going to happen because the UFC, they set up medicals for me to do,” Penn said. “I did the medicals and they were sending a film crew down and we were getting all that together and I assumed we were setting up the fight, and that might have been what was happening. But, at the end of the day, [UFC matchmaker] Sean Shelby called me and said it would be more convenient for all of us to move the fight to April 23.”

While an opponent for Penn has still yet to be named, the tough and gritty Hawaiian has been preparing nonetheless, and he has been doing so under some of the best in the game at Jackson’s MMA in Albuquerque, New Mexico.

With that being said, he plans to stay put up until the fight:

“You have heard ‘what you feed the most, grows the biggest,’ and I’m going to stay here and immerse myself in the martial arts and see how good I can get,” Penn said.

Despite having gone winless in his last four bouts to date, “The Prodigy” feels as if he can still hang with the best.

Are you interested in seeing Penn back in the Octagon?