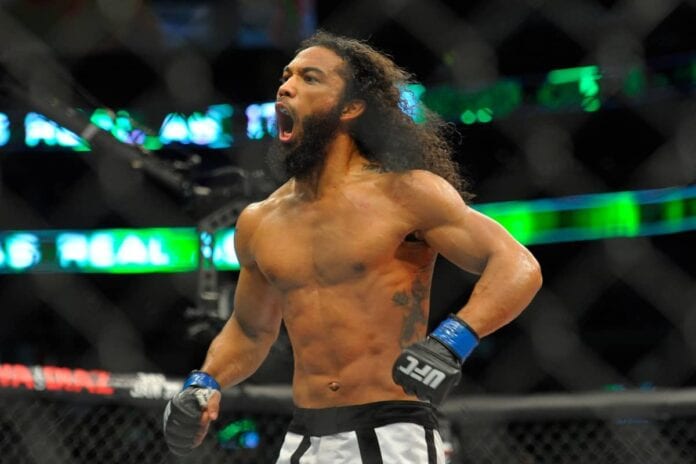 The last time we saw former lightweight champion Benson “Smooth” Henderson compete, he was coming off of a tough loss to Donald Cerrone at UFC Fight Night 59 in January, and took a short notice fight at welterweight against dangerous prospect Brandon Thatch at February’s UFC Fight Night 60. “Smooth” impressed many by not only being competitive against the larger Thatch, but finishing the fight via submission in the fourth round.

After the fight, Henderson was unsure whether he would completely move up to 170-pounds, or stay at his home of lightweight. It looked as if he was going to stay at 155-pounds when he verbally agreed to fight top contender Michael Johnson at The Ultimate Fighter 21 Finale, but that fight recently fell through with Henderson pulling out due to injury.

Johnson then made comments about “Smooth” being afraid to fight him, and it now looks as if that fight will not happen at all. In a recent interview with the MMA Hour, Henderson made it clear that he will be permanently moving up to welterweight:

The former champion said that he is planning to bulk up, but remain explosive, and he hopes to impress many with his next outing at 170-pounds:

“We’re going to do a whole new unveiling for 170. I’m trying to walk around at 182 to 185, walk around at maybe six- or five-percent body fat, and just be explosive. Really open some eyes up with my next fight at 170,” he said.

Henderson also knows exactly when and where he wants to fight next. The UFC is set to head to South Korea on November 28, 2015, and with “Smooth’s” mother being from South Korea, the former champ is doing everything he can to get on that card:

“I’ll do whatever it is I physically, possibly can…I will be ready for that Korea card. And you’re going to see a whole new beast.”

Despite moving up, Henderson also spoke up on the situation regarding the Michael Johnson fight, saying that he was not scared, but he’s simply injured and will not be cleared for some time:

“I had an injury. I won’t be cleared for a little while,” he said.

“So I had to respectfully bow out of that one. I was kind of disappointed in myself, but you’ve got do what the doctors say because ultimately they have the piece of paper they have to sign off for you, and my doctor wouldn’t do that. So I’m not cleared.”

It looks as if the injury could have come at an opportune time, as Henderson now has time to rebuild himself and prepare his body to fight at a heavier weight class. Will the former champion see success at welterweight?