LowKickMMA.com
Home UFC News Ben Rothwell Wants Dos Santos Or Miocic, But They May Already Be... 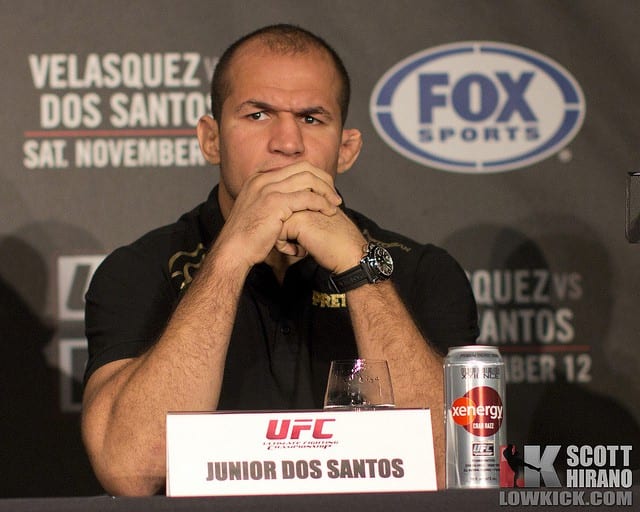 After an up-and-down UFC career, No. 10-ranked heavyweight “Big” Ben Rothwell scored what most likely ranks as his biggest-ever MMA victory when he knocked out former Strikeforce and DREAM heavyweight champion Alistair Overeem with a first round right hand in the co-main event of September 5’s UFC Fight Night 50 from Connecticut.

The win out him in prime bargaining position for a big fight, and apparently he’s already got a plan figured out. Speaking to UFC Tonight’s Ariel Helwani, Rothwell detailed three heavy-hitters he’d like to face next:

“Ben Rothwell looked great a couple weekends ago at Foxwoods when he defeated Alistair Overeem. He did not break his forearm in that fight. A lot of people, thought including him, that he did, but he did not. He has a doctor’s appointment on Friday to check out how he’s feeling health-wise. He said he’s been battling some injuries heading into that fight; didn’t want to talk about them.

But he said in a perfect world, he wants to fight on January 31, and he gave me a wish list. This is his top three opponents for his next fight: 1.) Junior dos Santos 2.) Stipe Miocic 3.) Andrei Arlovski.”

All three fights would be potentially exciting slugfest, but news followed that the first two opponents on Rothwell’s list might not be available come January 31:

“Now, here’s where things get interesting. I’m hearing from sources close to Stipe Miocic that is ‘more than likely’ that Stipe will fight JDS on December 13 at FOX UFC Saturday in Phoenix, Arizona.

Now, JDS’s camp tells me they’ve heard the same, but nothing official just yet. They also told me they would prefer a three-round fight because they want to ease back into it. Of course JDS hasn’t fought since last October.”

Dos Santos, if you’ll remember, was scheduled to face Miocic in the main of The Ultimate Fighter (TUF) Brazil 3 Finale on May 31 before a hand injury forced him out and allowed Fabio Maldonado to step and get plastered in 35 seconds in a farce of a main event.

There’ve been talks to get a rematch with Miocic booked, but nothing has been made official. It still hasn’t, but apparently signs are pointing to the bout becoming a reality.

However, with the No. 4-ranked Miocic a possible title contender in the future, is it wise to match him up with dos Santos, a talented boxer who undoubtedly has the skills to dispatch all heavyweights aside from champion Cain Velasquez?

Perhaps Miocic should fight Rothwell, because a knockout loss to dos Santos would be devastating, and it surely wouldn’t earn “Cigano” another shot at the belt. What do you think?