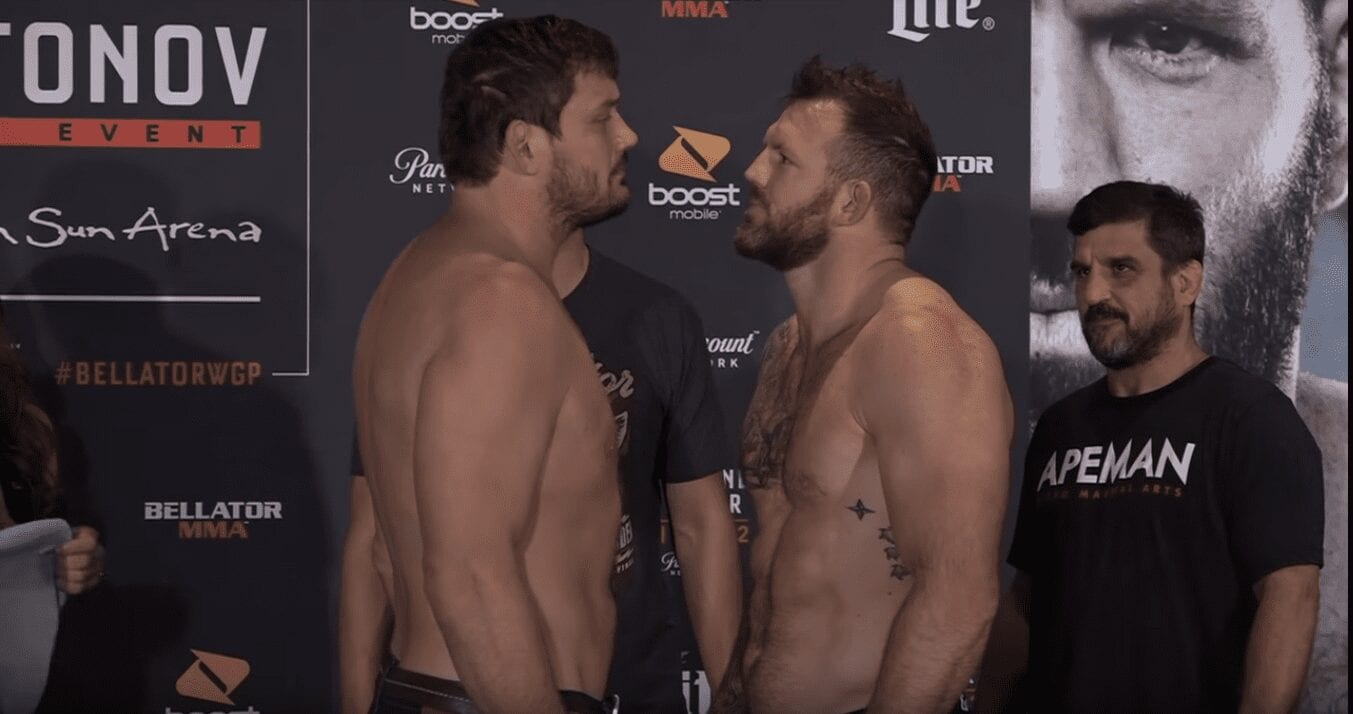 Bellator 207 results are in the book from the Mohegan Sun Arena in Uncasville, Connecticut.

It’s once again fight day here at LowKickMMA, and the talent on display tonight (Friday, October 12, 2018) will come in the form of Bellator 207. Headlining the card are Matt Mitrione and Ryan Bader, but there’s a whole bunch of great fights also taking place on the rest of the main card.

In the second, Mitrione whiffed on a wild hook and is taken down. Bader is on top half guard and fishing for a cross-body kimura. Mitrione is able to pull to full guard, but Bader is still doing damage. In round 3, Bader took him right down as soon as it started. Bader was in complete control although the live crowd is not enjoying what they were watching – a mauling in the main event. Bader isn’t doing a ton of damage from on top just controlling. Bader earned the decision win to advance. He even picked up a couple 30-24 scores. Ouch.

Sergei Kharitonov and Roy Nelson meet in a heavyweight bout in the co-main event. In round 1, they are throwing hard punches, each landing some. Nelson shoots in but he’s stuffed. Nelson goes down to his knees and Kharitonov knees him right in the head. It doesn’t look hard but it was definitely illegal. Sergei is peppering Nelson with his jab. Nelson is landing a few of his right hands, but the Russian is popping his head with jabs and then slams a hook to the body. A huge flurry of punches to the head rocks Nelson badly.  A knee and follow-up punches drop Nelson face first and this one is over

Lorenz Larkin vs. Ion Pascu is next in a welterweight tournament alternate bout. In round 1, Larkin lands a pair of push kicks to the belly before being shot in on again. Pascu can’t get the takedown and presses him into the fence. Larkin touches him up a bit with some outside striking. In round 2, Larkin is effective early with jabs upstairs and scattered low kicks. Pascu still having a hard time getting into a rhythm. Pascu is starting to get flustered with being stuffed by Larkin’s takedown defense. Pascu grabs Larkin’s leg in an attempt to score a takedown, but Larkin drops him with a right uppercut to the jaw. In round 3, Larkin is sticking his jab in Pascu’s face, keeping him away and frustrated. Pascu finally gets Larkin to the canvas and lands several strikes. The judges gave the win to Larkin.

Corey Browning vs. Kevin Ferguson Jr. is next in a lightweight bout. In round 1, Slice lands a right hook and then shoots in for a successful takedown. Browning scrambles. Browning gets back to his feet, but Slice takes him right back down. Browning is cut on the right side of his head; he sweeps Slice and lands on top, looking to take his back. Browning smoothly puts Slice into a crucifix from behind and lands elbows to the head. In round 2, Slice lands a clean right-left to the head, but Browning fires off a hard right to the jaw, dropping Slice. He recovers quickly and scrambles into Browning’s guard. Slice slithers to his right and locks in an arm-triangle. It’s tight but Browning is fighting through it. Slice got tired and Browning unloads a barrage of punches until the fight is stopped.

Opening the main card on the Paramount Network is Carrington Banks vs. Mandel Nallo in a lightweight bout. In round 1, they trade some decent punches. Banks shoots in and ties Nallo up before being taken down. Nallo locks in a D’Arce choke but Banks is fending it off nicely. The choke is deep but he eventually pops out of it. Banks pops up to his feet and powers Nallo back down to the canvas and lands in his guard. Nallo doesn’t do anything else in the round. In round 2, Nallo with a step-in knee that lands right to the jaw! Banks is out cold.

Heavyweight Bout: Sergei Kharitonov def. Roy Nelson via KO (punches and knees) at 4:59 of Round 1.

Lightweight Bout: Mandel Nallo def. Carrington Banks via KO (knee) at :57 of Round 2.