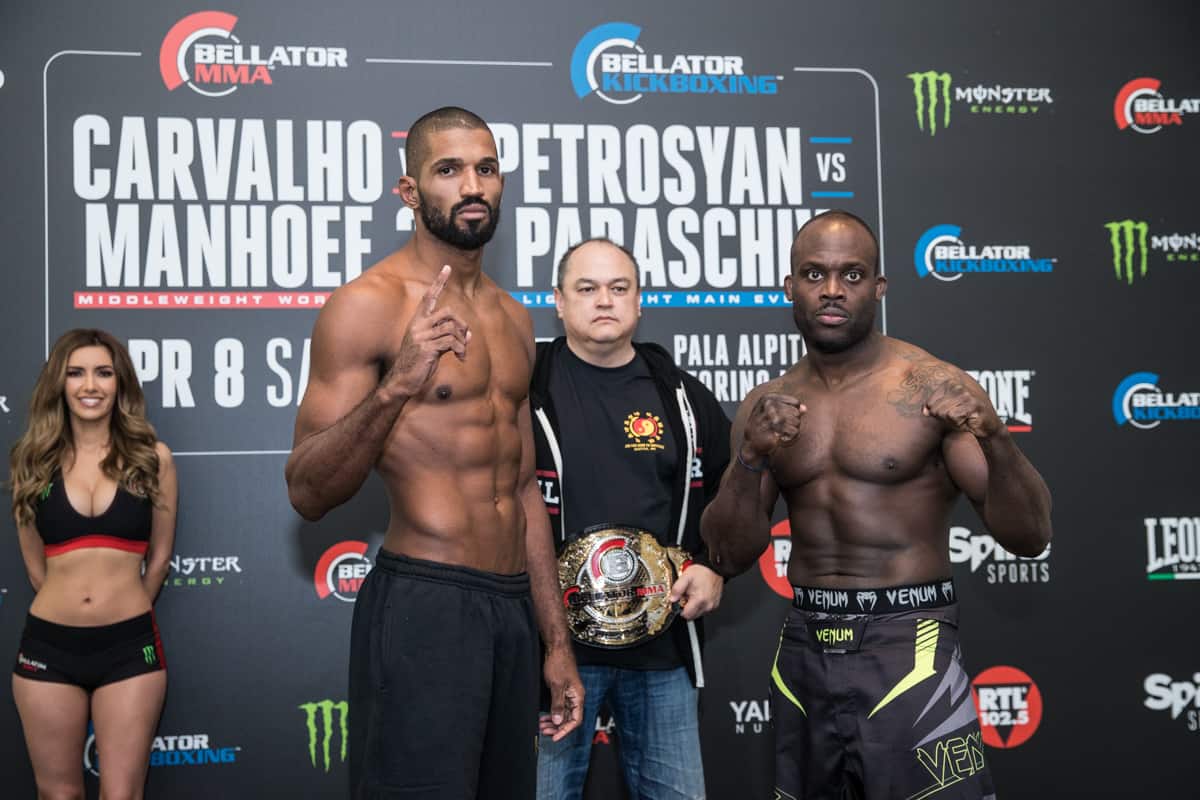 It’s once again fight day here at LowKickMMA, and the talent on display today (Saturday, April 8th, 2017) will come in the form of Bellator 176. Headlining the card are Rafael Carvalho and Melvin Manhoef, but there’s a whole bunch of great fights also taking place on the rest of the main card.

Rafael Carvalho and Melvin Manhoef meet in a middleweight title fight in the main event. In round 1, Carvalho pressed forward, and Manhoef stepped aside, but in the meantime, Carvalho poked him in the eye. There was a pause in the action, but things got back going. Manhoef caught him with a big left hand. Manhoef scored a takedown late in the round and worked him over from guard. In round 2, Manhoef came out and clinched with him. Manhoef scored a takedown, but Carvalho scrambled to his feet. Carvalho clinched with him but then let go and started exchanging.  In round 3, Carvalho went for a takedown but Manhoef grabbed the fence, and the referee took a point away from Manhoef. Carvalho scored a takedown.  In round 4, they kept the fight standing for the majority of the round. Manhoef pressed him and walked into a huge kick by Carvalho for the KO finish. Carvalho is still the middleweight champion.

Anastasia Yankova and Elina Kallionidou meet in a female women’s catchweight bout in the co-main event. In round 1, Yankova pressed forward and threw world exchanges. Kallionidou was looking to counter strike with her. Yankova clinched with her up against the fence and land a series of strikes. Yankova scored a takedown with less than a minute left in the round. She landed a series of strikes from side control. In round 2, Yankova kept the pressure up, and they exchange for the majority of the round. Kallionidou clinched with her up against the fence to end the round. In round 3, they continued to exchange, and Yankova just kept blitzing her with strikes in order to get the win. The judges gave the win to Yankova by decision.

Djamil Chan vs. Valeriu Mircea is next in a lightweight bout. In round 1, they had a feeling out process, which led to the fans booing. Chan took him down and got his back. Mircea landed a series of strikes from mount, but Mircea pushed him back to guard. Chan dominated the round on top. In round 2, Chan came out more aggressive and throwing some wild shots. He shot in on a takedown and scored it inside a minute into the round. Mircea scrambled back to his feet. Chan scored a takedown midway through the round and got guard then worked him over with strikes. They were stood up after Mircea headbutted Chan. They exchanged then Chan scored a takedown to end the round. In round 3, Chan scored a takedown right out of the gate and worked him over with strikes from the top. Mircea scrambled up to his feet late in the round, but Chan took him down and got side control then guard to end the round. The judges gave the win to Mircea by majority decision.

Opening the main card on Spike TV is Samba Coulibaly vs. Mihail Nica in a lightweight bout. They exchange right away, and Coulibaly went for a takedown, but Nica reversed and took him down. Nica locked in an anaconda choke, and that’s a wrap.