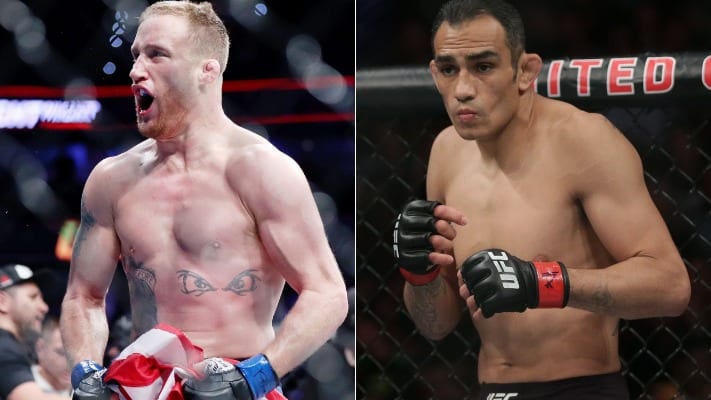 Bas Rutten gave his thoughts on the upcoming matchup between Tony Ferguson and Justin Gaethje.

The pair will collide for the interim lightweight title at UFC 249 on May 9 with the winner going on to face Khabib Nurmagomedov in a title unification bout.

Ferguson is unsurprisingly the betting favorite and Rutten is leaning towards “El Cucuy” getting the victory. At the same time, the former UFC heavyweight champion feels the power of Gaethje could play a huge factor in the bout.

“This is gonna be very hard to predict the fight like that because Tony’s never been hit that hard,” Rutten told Submission Radio. “Because like you said, Gaethje can freakin’ swing, and if you get hit that hard and if you connect with that, that could be a big problem. But Ferguson is also a smart guy. We think, oh, he comes forward, but if he knows he’s gonna face the hardest punches he ever had, he might start moving in and out.

“I think Ferguson [will win] you would think, because he fought the better competition at the end, and he’s been such a long time in the UFC. But like you said, if Gaethje’s gonna connect, I mean, he hits so hard. What if Gaethje takes him down and he doesn’t work the guard, he squats in there and he just starts landing punches on the ground. I mean, he’s got so much power in his hands, he might stop him with strikes on the ground. But Ferguson is the guy, he’s never been knocked out. The guy’s just insane, he just keeps on coming. I love it. That’s hard.”

It’s certainly a risky fight for Ferguson to take.

Gaethje has become a different fighter ever since his last defeat with three straight first-round knockouts. However, the former interim lightweight champion should still remain confident as ever as he looks to extend his UFC winning streak to 13.

UFC 249 takes place May 9 at the VyStar Veterans Memorial Arena in Jacksonville, Florida. The co-main event will see a bantamweight title fight between Henry Cejudo and Dominick Cruz.