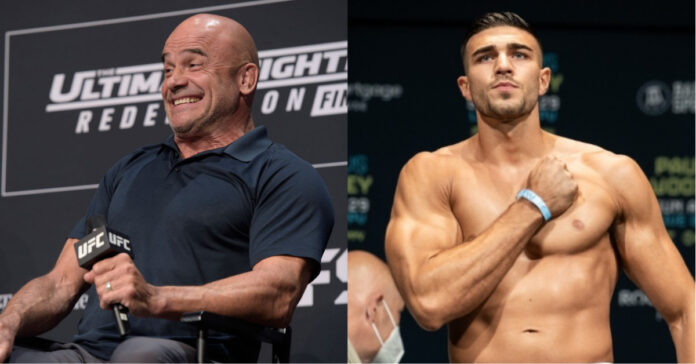 It was recently announced that after one bout cancellation and months of social media back and forths, Tommy Fury and Jake Paul were finally slated to fight on August 6. Even with Fury recently being denied access to the United States, potentially due to his brother’s association with alleged cartel leader, Daniel Kinahan, it still seems inevitable that the pair will meet at some point in the future.

It was also reported that Fury was set to appoint Shane McGuigan, who has trained the likes of Carl Frampton, David Haye, and Josh Taylor, as his head coach, replacing his father, John Fury.

Even with this news, former UFC heavyweight champion and MMA pioneer, Bas Rutten, says that he would offer to train Fury for Paul fight.

“I would love to train Tommy Fury, are you kidding?” Rutten said to Karate Combat. “S**t, for the Fury family; I love Tyson. Major fan of this guy and I think [that] we can do some damage.”

“Yeah, it would be great. I’ll be in the corner. Yeah, at least he has a cornerman.” (H/T) GiveMeSport)

Rutten added that he felt he knew the style to defeat Paul, saying that if to Fury was to change up his stance it would give him a greater chance of success.

“I have a different style, it’s more of an open stance,” Rutten said. “And I think a lot of people are really not reactive to it. Tyson used to fight like that and was very effective with it. It gives you almost equal power in both left and right hands.”

Do you think Bas Rutten should train Tommy Fury?