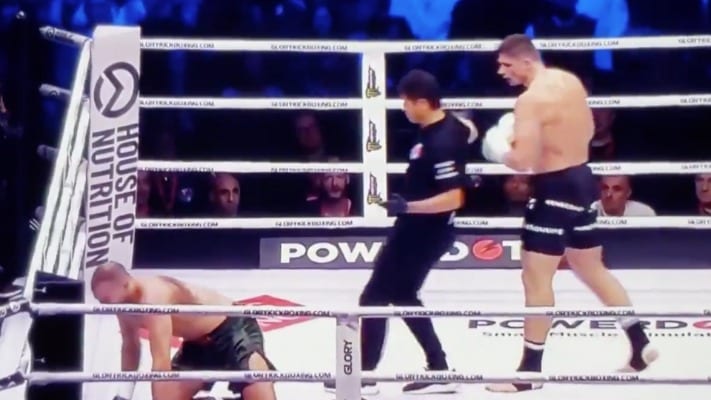 The rematch everybody was waiting for delivered for the most part until history repeated itself. Badr Hari challenged Rico Verhoeven for the GLORY heavyweight title at GLORY Collision 2 on Saturday.

The pair fought back in December 2016 only for Hari to lose after suffering an arm injury. This time, Hari was focused and looking to end their unfinished business. He certainly had the upper hand as he not only dropped Verhoeven once but twice during the three rounds of action.

Verhoeven — who had previously never been dropped in his GLORY career – was in trouble but as Hari attempted a spinning wheel kick, he fell awkwardly on his ankle. As soon as he didn’t get up, the crowd started to worry.

The referee soon started a ten-count and with Hari unable to get back to his feet, Verhoeven was once again awarded the TKO victory in unsatisfying faction.

Hari was devastated as he started shouting and crying as he had to get consoled by his team and Verhoeven.

Hopefully, we get a trilogy fight with a more definitive ending.

What did you make of the fight?