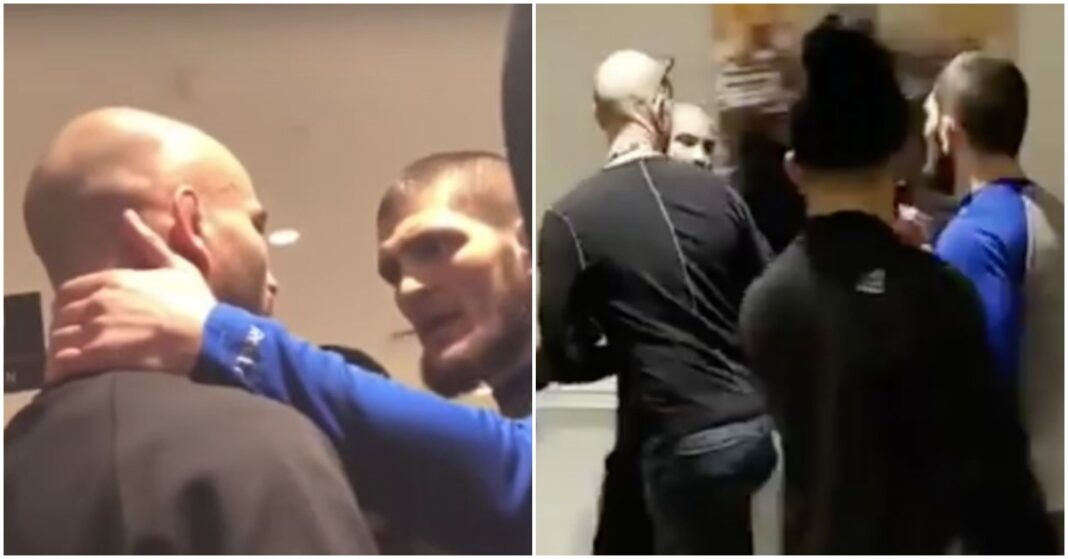 Artem Lobov has explained exactly what happened during his now-infamous clash with Khabib Nurmagomedov and his cronies. ‘The Russian Hammer’ was cornered by Khabib and a group of men during UFC 223 fight week back in 2018.

A clip of the incident began to circulate online and prompted Conor McGregor to fly into New York to protect his friend.

The Irishman turned up at the UFC 223 media day in pursuit of Nurmagomedov and ended up throwing a dolly through a bus window, injuring some of the people on board.

During a recent interview with Severe MMA, Lobov explained that ‘The Eagle’ acted differently when he was alone compared to when he was with his friends.

“Khabib then came up to me alone and he started saying all this to me, ‘What are you saying?’ I said, ‘Khabib hold on a second. If somebody would call your brother a chicken, would you have answered something to him?’ And he was like, can’t really say anything cause he knew I was right. So he turned around and went away,” Lobov said.

“So I picked the phone back up and continued my interview. But then a minute or two later Khabib comes back with fifty… I don’t know whatever, how many guys were there,” Lobov continued. “He comes back and suddenly he is changed. Now I’m telling him the exact same thing again like, ‘You would have done the same thing.’ And he is asking me the same question over and over.” (Transcribed by Sportskeeda)

The now-former fighter, who was affectionately nicknamed ‘The GOAT’ by fans, has also recently opened up about his decision to walk away from the sport. Lobov explained to Ariel Helwani that his decision to retire was not an easy one and meant confronting some tough truths.

“When I retired, I finally had to come to this point, where I had to say to myself, ‘well that’s it. You will not achieve those goals, it will not happen for you. You weren’t good enough You didn’t manage to get where you wanted to get. This is it now for you as a fighter, time to hang it up Artem. Bye-bye. So, that’s why it was an emotional time for me and I wasn’t really ready yet to talk about it,” Lobov said.

Do you think Khabib Nurmagomedov was out of line for cornering Artem Lobov while he was alone?