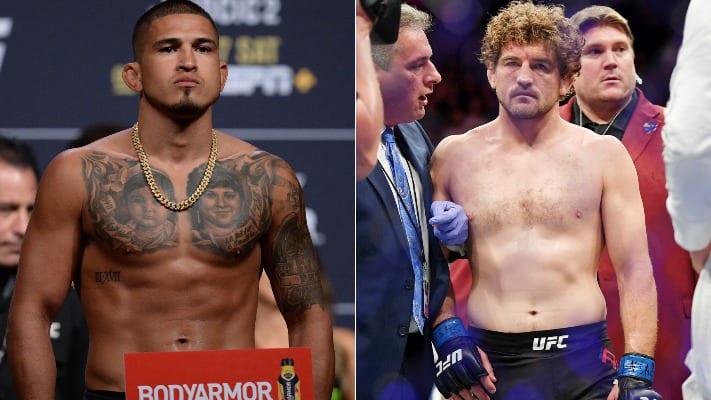 Prior to his fight with Nate Diaz at UFC 241 this past weekend (Sat. August 17, 2019), it seemed like a bit of beef was brewing between teammates Anthony Pettis and Ben Askren.

Pettis was caught on camera speaking to American Top Team’s Yoel Romero, a teammate of Jorge Masvidal. “Showtime” said he was happy for Masvidal after his record-breaking knockout win over Askren at UFC 239. This seemed to upset “Funky,” who voiced his concerns on Twitter, saying he doesn’t need any “fake friends.”

Now that the dust has settled after Pettis’ decision defeat to Diaz, Pettis took to social media to address some of the rumblings of a beef between himself and Askren. The former 155-pound champion responded to some fan comments on his Instagram page who were questioning the situation.

Pettis claims he has “no beef” with Askren after his comments prior to UFC 241.

In regards to his comments, Pettis clarified he was happy for Masvidal’s success, because they’re friends, not happy because Askren got knocked out. He also said he believes Askren will bounce back after the defeat.

It will be interesting to see if Askren issues out any further comments on the situation.

What do you think about Pettis claiming there’s no beef with Askren?