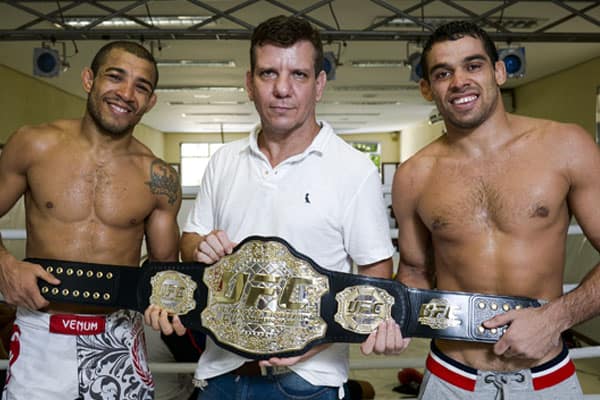 With so many fighters competing in not only the UFC, but all of MMA, there are gyms all over the world and professional fighters can be seen training in many different places. One of the very best gyms in the world, and probably the best gym in Brazil, however, has to be Nova Uniao, home to the likes of featherweight king Jose Aldo, former heavyweight champion Junior Dos Santos, and former bantamweight champion Renan Barao.

So what does any fighter need to be great? Well for one, he would need a strong head coach and trainer and the men of Nova Uniao have this in Andre Pederneiras, a long time trainer, co-founder of Nova Uniao and president of Shooto Brazil.

Pederneiras is clearly doing something right with 12 fighters on the UFC roster, two UFC championship bouts coming up, and a plethora of stars competing in other organizations. However, come 2016, these fighters won’t have the highly touted coach in their corner anymore.

Speaking with PVT (via MMAFighting) Pederneiras announced his plans to step down as head coach, and corner man for Nova Uniao. Although he said he will still be around the gym, he admitted that the traveling to attempt to corner all of his fighters has just become too much:

“I’m not saying I will ever go (to a fight) again, but this will reduce my travels to almost zero. There are so many fighters and I can’t just go to one’s fights and deny to others, which is happening today and makes me upset.”

Pederneiras also mentioned that he will corner his 1000th fight this year, and his goal now is to become a consultant for the gym and to manage fighters:

“I will complete 1000 fights as a coach this year, so I thought that this is a good number to go and say ‘it’s good, I’ve done my job as a cornerman and I want to stay at backstage now’,” he said. “I will become a consultant for Nova Uniao, that’s my goal today, and continue to manage the fighters.”