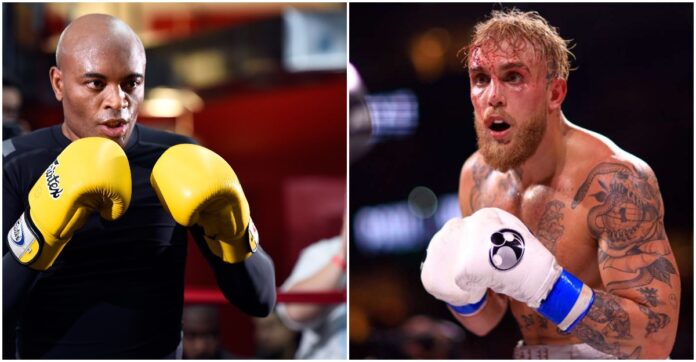 Former UFC champion Anderson Silva continues to shine bright outside of the Octagon while making a heap of money in the process.

Anderson Silva competed in a boxing exhibition this past weekend in Abu Dhabi, which saw him dismantle and drop Bruno Azeredo between the ropes. The Brazilian also competed alongside boxing legend Floyd Mayweather, who cruised his way through his exhibition with Don Moore. Following the contests, Youtube sensation-turned-boxer Jake Paul made took to Twitter to claim he would beat both Silva and Mayweather “in the same night.”

Luiz Carlos Dorea, Silva’s boxing coach who has been by his side during his dominant run as UFC middleweight champion and has helped the 47-year-old make the transition into boxing effortlessly, found Paul’s comments laughable.

“You have to laugh, right? Have to laugh,” Dorea told MMA Fighting. “Jake Paul is doing his part, which is to promote. It’s obvious there’s no way he can face Mayweather, one of the best boxers of all time, and Anderson, another legend. He never fought a striker.”

In his three-year boxing career, Paul has gained an undefeated record of (5-0), with his most notable victories against former MMA champions Tyron Woodley and Ben Askren. Previous to that, Paul generated highlight feel knockouts over former NBA star Nate Robinson and fellow Youtuber Ali Enson Gib.

It was announced that Paul would make his return on August 13th, but an opponent is yet to be confirmed. Dorea stated Silva “never stops training”, and a fight between the two could potentially happen if the talks were fair.

“He has to think of an exhibition,” Dorea said when asked about a fight materializing between the two. “If he’s considering an [official] fight, I think he will pay dearly. In promoting, it’s all valid. He’s doing his part, using his tongue, but you can’t use your tongue inside the ring. You have to use your fists, and it’s a whole other story. Anderson is far better.”

Dorea said that Anderson Silva had verbally agreed to return to the UAE for a boxing bout on October 15th, so a fight with Paul on August 13th is doubtful. Dorea was still uncertain if Silva would take part in another exhibition or an official boxing match. Still, it is a high possibility the fight will get booked once the public interest grows.

“Anderson has always trained boxing when he was fighting MMA,” Dorea said of his evolution. “He was always a striker with good boxing and muay Thai. Now, almost two years later and the three [boxing matches] we’ve done, and training boxing specifically for this, Anderson is evolving a lot. He’s more confident in his movement and defense. He had great boxing for MMA, and is putting on a show now. His level is so high.”

What do you make of the Anderson Silva and Jake Paul talk? Is this a fight you’d be interested in viewing?