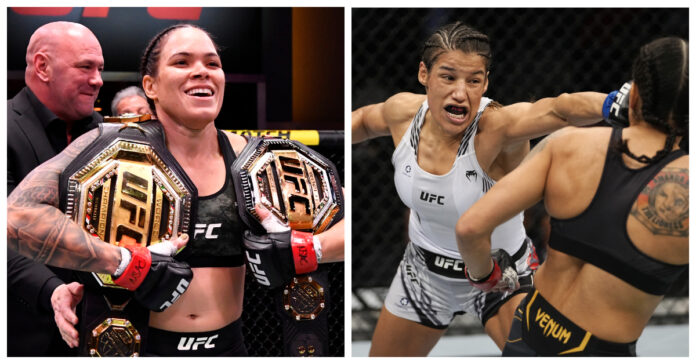 Former two-division UFC women’s champion Amanda Nunes is of the impression that Julianna Pena held back the trash talk.

Following a major upset win Pena secured to snatch the UFC bantamweight title from Nunes, the pair were put together to coach a season of The Ultimate Fighter. ‘The Venezuelan Vixen’ seemed to share a sense of animosity with the 34-year-old Brazilian and had been very vocal about criticism. The pair are slated for a rematch at UFC 277 on July 30 in Dallas, Texas.

Given the trash talk that went into their first bout, ‘Lioness’ expected more heated interactions to follow in the show. However, Nunes seems surprised by what she actually got from Pena.

In a recent appearance on MMA Fighting podcast Trocação Franca, Amanda Nunes detailed her surprise at Julianna Pena’s lack of trash talking when compared to her activity online. The 32-year-old had called Nunes a “high-maintenance” person along with being a “diva” on the production set for the show.

“Since Julianna was talking a lot, being the trash talker she is, I thought she would really bring that to TUF, but it didn’t go as I expected,” said Nunes.

“She was cool, completely different from who she really is. I don’t know if she was faking it because it would air on TV and she doesn’t want bad publicity. She’s too much, and everything’s full of Julianna already – imagine if she’s the way she [really] is on TUF. I think it wouldn’t be good for her, so I think she held back a little bit.”

Nunes speculated whether having daily interactions made Pena switch her stance towards her.

“I don’t know if she was used to seeing me all the time and that’s why she pumped the brakes on that stuff,” Nunes said. “I even told her, ‘Don’t you talk online? I’m in front of you now, open your mouth.’ But it was cool. [Normally] I don’t talk too much but I asked her, ‘What’s up?’ That’s what TUF is all about, it’s a reality [show] and people want drama.

“I even tried to poke her a little bit to see if I could get something out of her, but didn’t get much. … I didn’t understand much of it. I real expected something completely different than what she’s when on the show.”

Speaking on her title loss last December, Nunes shared her thoughts on why she feels like she needed it to grow.

“That was my first belt and I really want it back,” Nunes said. “That loss motivated me a lot. Instead of demotivate me, it really injected fire in me and made me rethink a lot of things and make several changes in my life. I’ll continue on this vibe. I’ll dance to the music that plays and won’t let any [belt] go without an answer.

“My love for the sport speaks louder. I love everything that surrounds MMA. It’s always hard for someone to retire, especially in their prime. This rematch will be another great achievement. I’ll get this belt back, no doubt about it, and it will be historic. That’s what makes me so fascinated about this sport.”