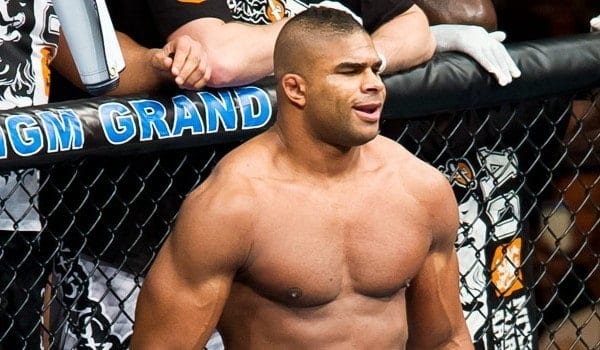 UFC heavyweight Alistair Overeem has a “Big” challenge in front of him at UFC Fight Night 50, in the form of Ben Rothwell. Both men return from significant breaks, as Rothwell has served his nine-month suspension for elevated TRT levels, and “The Reem” has recovered from his elbow surgery. Word was that the former light-heavyweight Overeem was planning on coming back to 205, and the following tweet added to the rumours:

Now, as transcribed by MMAMania, Overeem is weighing a whopping 246 pounds….

“I weighed in when I got here at 247, so I don’t know what all this fuss is about me being 210… Ben’s a big guy, 260-265 pounds. He hits hard. He’s going to be strong. I have to watch out for the overhand right. He has a good left hook. But the submission game, not so much. I’m ready. There’s a lot of new stuff I’m going to show you. I’m learning every day. I went in with an open mindset. [Switching camps] was the right choice. Everyone is fantastic. I’m expecting good results from the high altitude training.”

Either Overeem was trolling at the time of his tweet, or he has gained 37 pounds since he posted it a week ago. Regardless, he will hit the scales later, and you can watch that right here, so stay tuned for any weigh-ins day related headlines featuring the Dutch giant.

Victory tonight for both men is a must, as Rothwell fell in to the promotion’s bad books for his bloods failure, and “Reem” had back-to-back KO losses in 2013, followed by his snoozer decision win against Frank Mir at UFC 169 in February this year. The co-main event in Connecticut will surely not make it to the judge’s decision, what do you think?