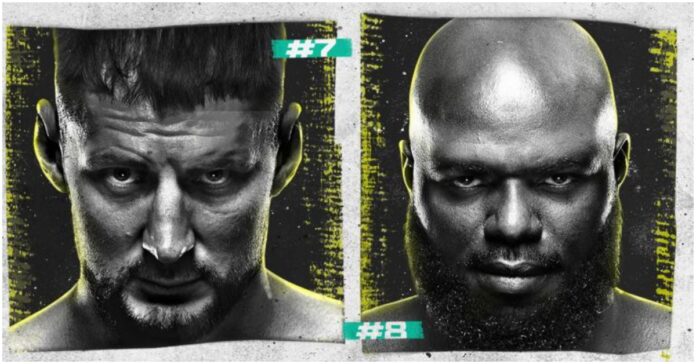 After a short break, the UFC is back, with a fight card headlined by top-ranked heavyweights Alexander Volkov and Jairzinho Rozenstruik. Both men are looking to get back to winning ways, and have the perfect opportunity to catapult themselves back into the title picture with a big win this weekend.

Check out who the LowKick MMA Staff think will come out on top in this heavyweight clash of titans:

Jairzinho Rozenstruik’s knockout power could well be the great equalizer in this one. However, ‘Bigi Boi’ often chooses to hang back and catch opponents with lethal counter strikes. Alexander Volkov’s extraordinary reach advantage will likely allow him to fight at range, and not step into the close quarter’s danger zone that Rozenstruik thrives in. It will be intriguing to see if the smaller cage force Volkov into some awkward situations that Rozenstruik could capitalize on, but for the time being, my pick is Alexander Volkov to win via decision.

Alexander Volkov vs. Jairzinho Rozenstruik For all the power and danger possessed by Suriname striking ace, Jairzinho Rozenstruik – we’re almost too often left with the fear of a rather gunshy and halted approach from the heavy-hitter, and to be totally honest, a main event matchup against Alexander Volkov gives me cause for concern that we’ve got a stop-start headliner awaiting up.

Volkov failed to ever get started against the blistering Tom Aspinall back in March en route to his first-round armbar loss, however, in the past against heavy hitters like Derrick Lewis, he’s shown poise and composure, albeit, before suffering a thunderous knockout loss. However, Alistair Overeem is also a prime example in that case – with Volkov managed to stop the Dutchman on that occasion. Rozenstruik and Volkov share that common foe in the form of Overeem, and prior to his buzzer-beating, lip-splitting KO win over the veteran in D.C. – Rozenstruik was conceivably en route to his first promotional blemish.

The Suriname native’s tendency to sit back and await the perfect opening, akin to his not too memorable win over Augusto Sakai leaves with questions regarding his ability to find openings against the tactical approach of Volkov.

Rozenstruik, akin to Volkov also struggled with the puzzle that is Ciryl Gane – however, I’m leaning toward the Moscow kicker and puncher to stray from in-fighting and land a decision victory over Rozenstruik.

Interesting matchmaking from the UFC here. The card looks solid but it’s the main event that will answer some major questions. Volkov goes into the bout as the favorite over Rozenstruik. Both are going through a skid in their careers and share two opponents they both lost to, Ciryl Gane and Curtis Blaydes. Rozenstruik has only ever been KO’d once and that was in 20 seconds against Francis Ngannou. Meanwhile, Volkov dropped his fight against Aspinall.

I see Rozenstruik winning this by KO in the first or second round. The longer the fight goes the more the odds tip in the favor of Volkov, who’s a volume puncher and might feel best suited to take the fight into rounds 4 & 5.

“I see Volkov playing a long technical striking game with Rozenstruik. I expect Volkov to make it a kickboxing match, utilizing leg kicks and the jab to keep distance and outpoint Rozenstruik for a unanimous decision win.”