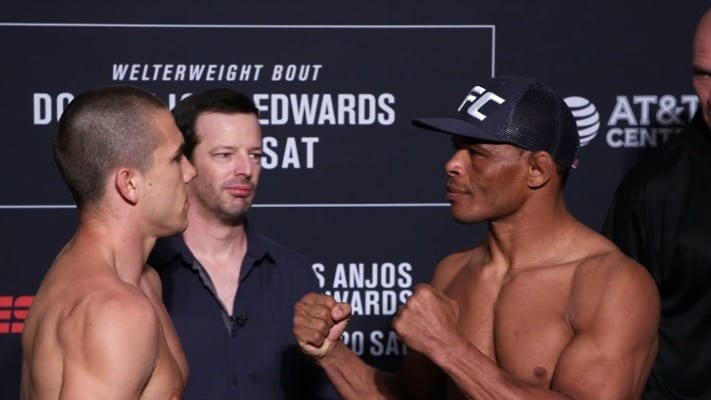 Alexander Hernandez vs. Francisco Trinaldo in a lightweight bout continues the main card of the UFC San Antonio event:

Round 1: Both fighters came out and were pressing the pace but neither fighter threw any strikes but rather a feeling out process. Hernandez was starting to throw more kicks as the round comes near the end. Hernandez catches a kick to the cup and we have a break in the action. He’s good to go though. Trinaldo caught him with a right hook as Hernandez was going for a kick. Trinaldo caught him with a knee strike to the gut to end the round.

Round 2: Both men were moving around quite well and staying light on their feet but not aggressive as they were both looking to counter strike. Hernandez clinched with him and was quickly outclassed by Trinaldo’s strength. Hernandez had a good sized bruise on his left cheek. Hernandez lands a hard left body kick right before the horn.

Round 3: Trinaldo slipped on a kick and Hernandez tried to take advantage but couldn’t. Trinaldo landed a nice spinning back kick. With two minutes to go, the fans were chanting various things. To their credit, the fighters stepped up the pace with their striking but nothing was landing.

Alex Pereira Guarantees A Thriller Against Israel Adesanya After Champ’s Lackluster Performance At UFC 276: “Give A Better Show To The Crowd”