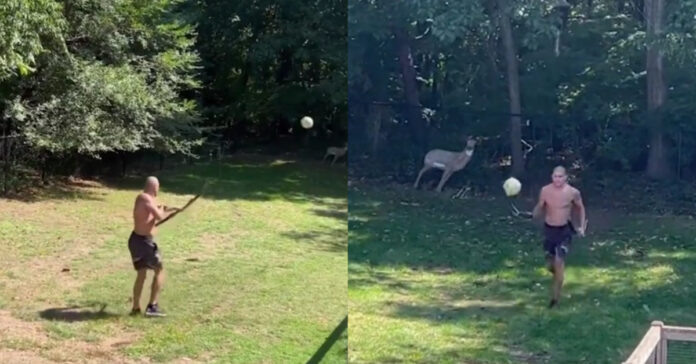 Alex Pereira has been getting some target practice done, but probably not with the type of targets you’re thinking of.

The two-division GLORY kickboxing world champion is showing off his skills with a bow and arrow in a recent clip uploaded to the UFC on BT Sport Twitter account. In the video, Pereira is seen kicking a soccer ball into the air and then hitting it with an arrow before it lands on the ground. It’s just another impressive feat for the man who will attempt to add UFC gold to his mantle on November 12th.

Of course, when Alex Pereira challenges Israel Adesanya for the UFC middleweight world championship, it will technically be a trilogy bout. The two combatants have met on two separate occasions with ‘Poatan’ emerging victorious in both outings and famously knocking out ‘The Last Stylebender’ in their 2017 rematch.

Israel Adesanya Believes That The Universe Has Served Him Alex Pereira

Coming off of three straight wins against Sean Strickland, Bruno Silva, and Andreas Michailidis since joining the UFC, Alex Pereira will face a familiar foe, but in a very different setting. Carrying the moment of defeating Adesanya on two separate occasions in the world of kickboxing, many suggest that ‘The Last Stylebender’ is living the final days of his world title reign. The champ doesn’t quite see it that way.

“After he beat me you know, in Brazil, I never had any plans of trying to get revenge or anything like that because I don’t hold on to things. I let go of things but again I’m telling you the universe has presented this to me and it’s right there. It’s the perfect alley-oop and I’m gonna slam this.”