Towards the start of the Olympic games I had a couple of conversations with friends and family in which we analyzed past Olympic viewing routines. We all pretty much concluded that Olympic viewing habits are different than other global events. Give or take a 100 meters race and the likes, you don’t set up to watch something specific. If you have time, you sit and watch whatever is on, otherwise you get bits and pieces of this and that.
With a full time job on my hands I wasn’t expecting to see that much of the action.

As chance would have it, as the clock was counting down to the Olympic opening ceremony, I (unknowingly) was counting down last moments of health, before a  nasty virus crept in. So, for the past couple of days, as I was bedridden with not much strength to do anything else, I got a pretty big dose of Olympic action.
The Olympics are a funny thing. The action during the day time is so bland, it almost feels like it should just be in the background while you are actually doing something else. Especially in my neck of the woods, where for some reason, Judo broadcasts are leading the way. Bo-r-ing!.  Then, on the other hand, there is the evening action which is totally exciting. The swimming so far has been great! I’ve also enjoyed some of the gymnastics and in my haze of illness, have an unexplained new fascination with weightlifting; it’s just so odd – what makes people want to do this?! I have to keep watching.

Back to the swimming for some observations and commentary. A few days before the games started, I happened to catch an interview with Michael Phelps. The guy looked liked the last thing he wanted to do was go to the Olympics. He honestly sounded like he hated swimming and couldn’t wait to get it over with. I actually felt bad for him, seems like he just wants to have a normal life. All of this is showing in his performance. It sort of feels like he said  ‘ah, might as well go and whatever happens, happens’.

That is totally his prerogative and he’s earned the right. He is still winning medals and more exciting to watch than many things in these games, but still… Just strengthens what I felt after watching the interview.

As I get back to full health and strength there are still many things I look forward to from these Olympics, it really is a whole lot of fun! My recommendations aside from the obligatory athletics and swimming is to watch diving which is just beautiful to watch. I also think the tennis action, usually not that big in the Olympics is going to be extra special because of the Wimbledon settings.
Enjoy the games! 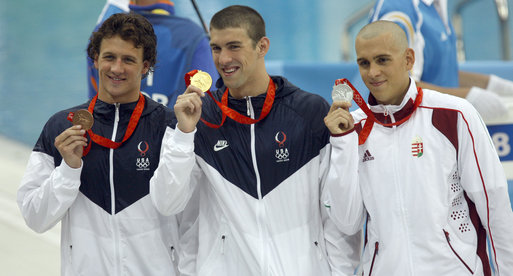 It’s not what it used to be… Phelps in Beijing.
Public domain photo. Feature photo jellybeanz via flickr