LowKickMMA.com
Home MMA News Quote: Sterling Is Scared, Will Get His Jaw Broken 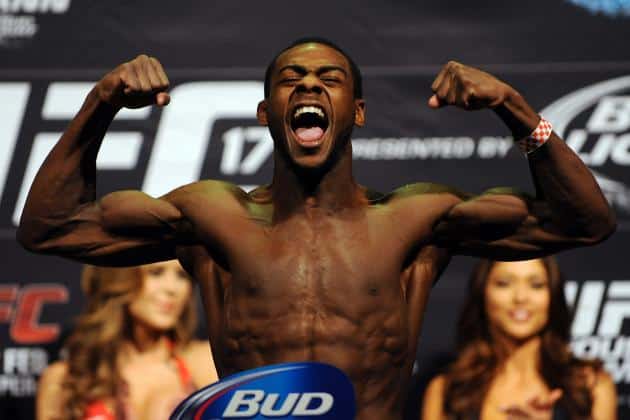 No. 5-ranked bantamweight prospect Aljamain “The Funk Master” Sterling will face off with No. 10-ranked Johnny Eduardo on the preliminary portion of tonight’s (December 10, 2015) UFC Fight Night 80 card from Las Vegas, Nevada.

Sterling has appeared to be quite confident heading into this bout, even going as far to say that he sees himself fighting for the title sometime next year.

While the Serra-Longo product may be expecting an easy win tonight, his Brazilian opponent has other ideas.

Recently speaking with MMAFighting ahead of tonight’s scrap, Eduardo mentioned that Sterling is actually scared, while also noting that he plans to break “The Funk Master’s” jaw:

“I’m excited with this opportunity to fight another top 10. He’s a good fighter, but his best part is his mouth. He talks a lot. He knows how to sell and promote a fight, different than other fighters. He’s doing it in a way that isn’t pleasant. He’s trying to get inside my head, attacking me with insane attitudes. We try to sell a fight, but always in a polite way. We have to respect our opponents. He’s just getting me more and more excited to go there and break his jaw, like I did with Eddie Wineland. Everything he says is funny to me. We can see when a fighter is scared of the other. It’s clear in the fight. He’s showing how scared and nervous he is, how insecure he is, and is trying to get inside my head.”

While he has proven to be a solid fighter, Eduardo also hasn’t competed in nearly a year and a half. That being said, he’ll likely have a tough challenge in the young and crafty Sterling.

Who do you see taking this one home?