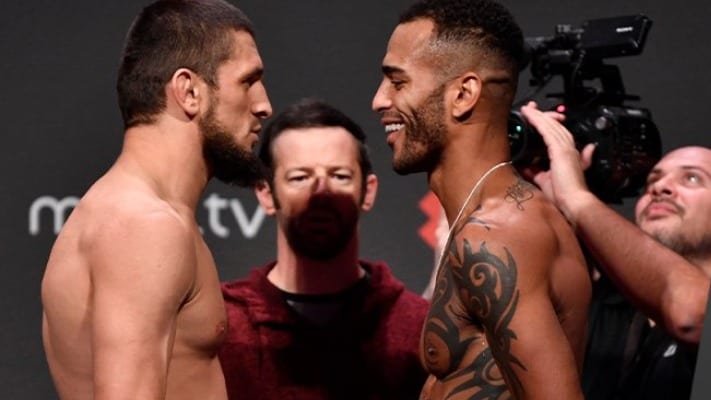 Next up on the main card of UFC Moscow is a welterweight bout between Zelim Imadaev and Danny Roberts.

Head kick is just blocked from Imadaev to start the action. Imadaev overextends on a shot and Roberts goes for a takedown, but it’s nicely defended. The pair exchange shots in the clinch against the cage. Some nice knees from Roberts inside the clinch. Imadaev responds with one to the body, but eats hooks from Roberts. Roberts lands a nice combination off an Imadaev kick.

Now Imadaev presses forward after Roberts looked to lose his footing. Roberts gets a takedown on Imadaev during a combination, but Imadaev gets back to his feet. Roberts with another nicely timed takedown, but Imadaev ends up on top after a scramble to end the round.

Imadaev connects on some nice shots and Roberts shoots in in response. But Imadaev ends up on top again, right into half guard. Roberts gets to his feet and circles out. Roberts lands a flush left hand down the pipe. Imadaev responds with a nice kick to the body, gets a nice combination going, but Roberts shoots in on the single leg again.

Roberts gets the back clinch and drags Imadaev down, only for him to shoot right back up. Imadaev with the takedown now, but Roberts is to his feet. Both men swing wildly, and Roberts lands a crazy overhand that drops Imadaev to a faceplant. That’s it.