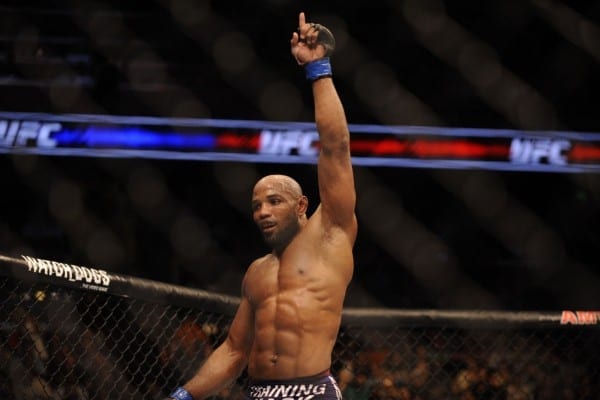 Looking to erase the bad memories of his dominant, one-sided loss to upcoming title challenger Luke Rockhold back in April, No. 4-ranked UFC middleweight Lyoto Machida made a quick turnaround to face No. 6 Yoel Romero in the main event of tonight’s (Sat., June 27, 2015) UFC Fight Night 70 from the Seminole Hard Rock Hotel and Casino in Hollywood, Florida.

The fight started a bit tentatively, with each competitor throwing a few glancing kicks. Romero snapped a body kick and blocked one of Machida’s, pressing the action. Machida responded with a slapping low kick, following with two more. Machida landed to the body and feinted, seemingly finding his rhythm. Romero answered with a big right that wobbled Machida momentarily. They traded kicks and punches as Machida snapped a left hand and ate a counter as the bell sounded on the first round.

Romero and Machida exchanged hard punches to start the second, and ‘The Dragon’ landed again. Romero pressed the pace as the crowd chanted his name, snapping a kick to the body and a leg kick. Machida landed a hard straight left, and Romero blasted him with a big right and a flying knee attempt. ‘The Dragon’ threw a left and a kick, but Romero responded with a flurry. Romero landed a huge combination of hooks, following with another. But he missed wildly, so Machida unloaded a combo of kicks. Romero ended the second with a wild flurry right at the buzzer.

Romero came out with an uppercut in the third before both fighters landed low kicks. ‘The Soldier of God’ slipped a big shot and took Machida down, unloading some absolutely vicious elbows that put ‘The Dragon’ out cold for the emphatic win.