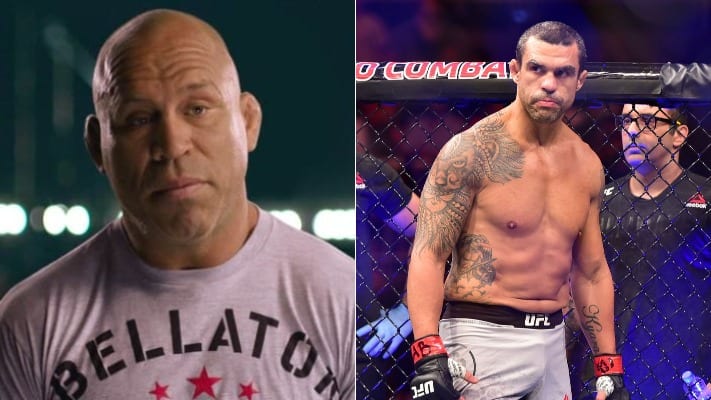 We may just end up seeing Vitor Belfort and Wanderlei Silva collide again.

Belfort and Silva first faced each other back at UFC Brazil back in October 1998 with the former earning the first-round TKO victory.

Back in December, Belfort revealed he was willing to give Silva a rematch and in a recent interview with Combate (via BJ Penn), “The Phenom” called for his old foe to keep selling the fight.

“Wanderlei, keep selling the fight. You will get a deserved beating,” Belfort said. “It will be a pleasure to be able to fight you again.

“And I’m warning you: try to work the straight strokes, it doesn’t come very open, otherwise you already know what you’re going to receive. Train hard and thank you for being part of the sport.”

Belfort vs. Silva Currently Being Negotiated

Belfort went a step further by revealing that a rematch is currently being negotiated.

However, he didn’t reveal anything more as he remained wary about calling it a done deal just yet.

“It’s being negotiated,” he added. “I learned that we can’t talk much when things are happening. This fight, for sure, has to be carried out. I have every interest. When two are hungry and have a plate of food. But it has to be a very good meal for both.”

It should be noted that Belfort is currently contracted to ONE Championship while Silva recently signed with Bare Knuckle FC. If their contracts allow them to compete fight fighters in other organizations, then it looks like we might just end up seeing Belfort vs. Silva II.