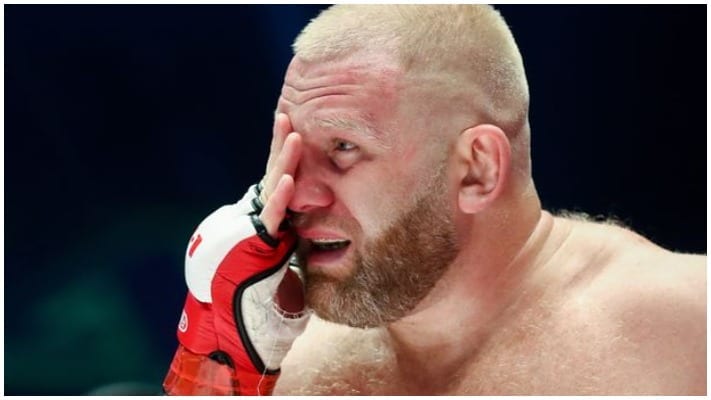 The incident took place at the ’Battle of Champions’ combat sports event in Moscow, Russia, and is believed to have been sparked by Kharitonov suggesting Yandiev owed him money – check out the clips below.

In a video interview from his hospital bed Kharitonov claimed Yandiev had attacked him with brass knuckles which caused serious damage to his eye socket as well as a nose injury that will require surgery, he said.

“I felt he hit me with something with his left hand. I know he always wore brass knuckles, he always had them with him… He broke my orbital bone.” (Translated by RT)

Kharitonov later took to social media to warn his fellow fighters against using their training outside of the cage, he wrote.

“I want to address all professional athletes. Don’t use your strength outside the gym, only if your close ones or those around you are threatened. We train to show the public our strength in the cage, the ring and on the tatami. The scariest thing is when people prepare specially in gyms to commit crimes. Trainers should identify such people and kick them out. I am a trained athlete, but in any case ended up in this situation. At least three months [of no] performances, fractures, bruises, etc… learn from the mistakes of others!”

Yandiev (9-1) who lost his first and only UFC fight to date in September 2018 also took to social media where he vowed to set the record straight regarding his altercation with Kharitonov.

“There will be a full interview, where [I will talk] from beginning to end about my relationship with this character,” wrote the fighter nicknamed ‘Beard’. About the conflict that happened between us. It’s all with the facts, the evidence. You’ll find out tomorrow. Please don’t write nonsense and heresy from the words of this liar. A little patience.”

Do you think Adam Yandiev will be cut by the UFC for attacking Sergei Kharitonov?