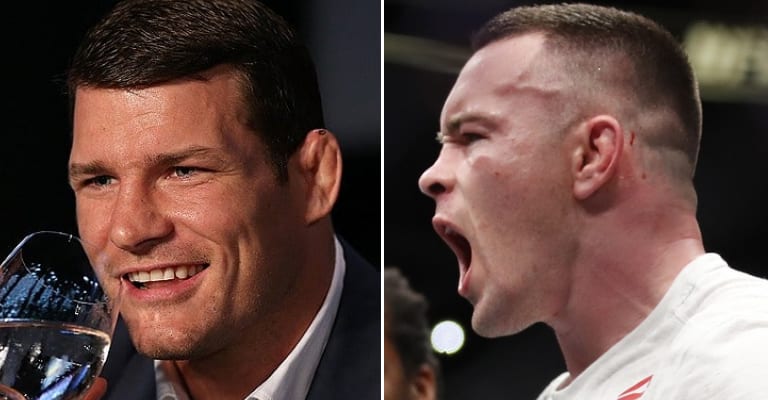 Earlier this week, the UFC made the call to grant Darren Till the next UFC welterweight title shot over interim champion Colby Covington.

The loudmouthed “Chaos” insisted he needed more time off to recover from sinus surgery following his decision win over Rafael dos Anjos at June 9’s UFC 225, a call that obviously didn’t sit well with his employers, who needed a headliner for September 8’s UFC 228 pay-per-view (PPV).

It was a somewhat strange (although not wholly surprising) set of circumstances that elicited a sport-wide reaction suggesting the many interim titles created by the UFC are simply worthless. Few felt sorry for the over-the-top, at-times offensive Covington, however, and that not surprisingly includes former UFCmmiddleweight champion Michael Bisping.

“The Count” sounded off on Covington, with whom he had a highly-publicized on-air spat with following UFC 225, in a video from MMAjunkie:

“That’s why I told Colby Covington to take a long walk off a short pier when he talked shit on that thing. Everyone was like, ‘Oh, he just won the belt, how can you talk shit?’ I said, ‘No he didn’t just win the belt!’ Is he the champion right now? No! Colby Covington, good luck going to President Trump with empty hands. At least I’m holding a beer, what are you holding, dumb (expletive)?”

Come for Michael @bisping‘s take on @darrentill2‘s title chances, but BE SURE and stay for his hot take on @ColbyCovMMA‘s current status. ???

Love him or hate him, Bisping may have won this leg of his ongoing feud with Covington, because “Chaos” doesn’t have a belt anymore – right or wrong.

What are your thoughts on the messy welterweight title picture?