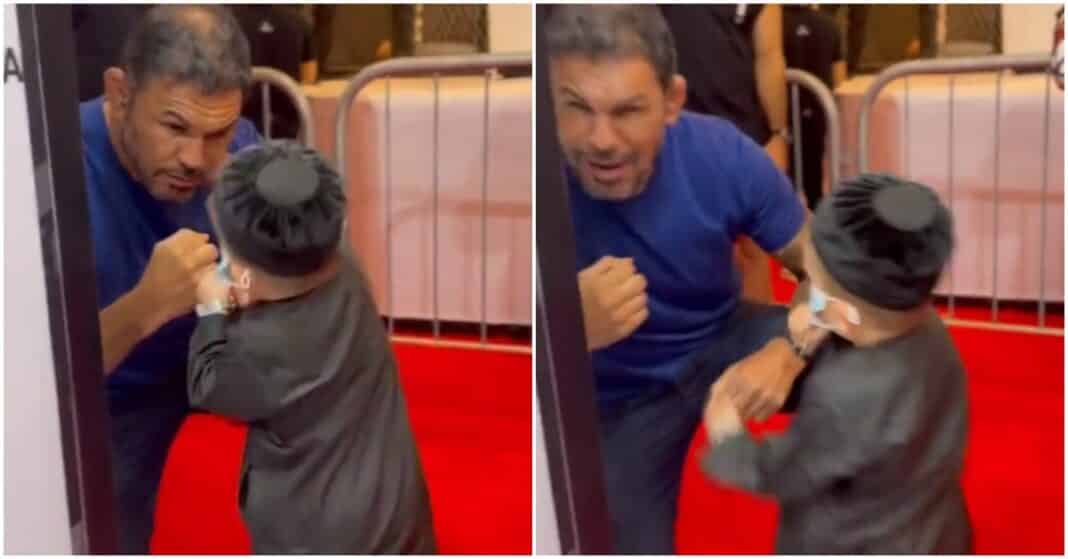 In a recently shared Twitter post, we see we see a meeting between MMA legend Minotauro Nogueira and viral sensation Hasbulla Magomedov.

The internet was a buzz when it was rumoured that internet celebrity and MMA cult hero, Hasbulla would be in attendance at UFC 267 in Abu Dhabi. Magomedov initially rose to fame via Instagram, the Dagestani-born blogger hails from the same area as fighters such as Islam Makhachev and Khabib Nurmagomedov, Makhachkala, Dagestan. Hasbulla’s posts with Nurmagomedov and Makchachev, along with videos of Magomedov wrestling monkeys, pretending to fight children and practicing MMA would make ‘Mini Khabib’ go viral.

The return to Yas Island with one of the biggest cards of the year will bring with it an array of MMA royalty, one of which was former UFC interim and Pride heavyweight champion Antônio Rodrigo Nogueira. In a recently posted Twitter video we see a an amusing meeting between Magomedov and Nogueira where the end up squaring off.

White would also post another video saying “Hasbulla, I’m on the Etihad plane right now on the way to Abu Dhabi. I cannot wait for our meeting and I cannot wait to see you.”

Dana White is also set to have a meeting with Abu Dhabi representatives, seemingly to extend their working relationship which was essential to the success of the UFC during the pandemic.

Could Hasbulla be a part of the UFC in the Middle East? We’ve seen the UFC integrate social media stars into their business. Having TikTok star Addison Rae as part of their production for UFC 264 and Dana white forming a some kind of partnership with the ‘Nelk Boys’.

What do you think? What will come of Hasbulla’s and Dana White’s meeting?