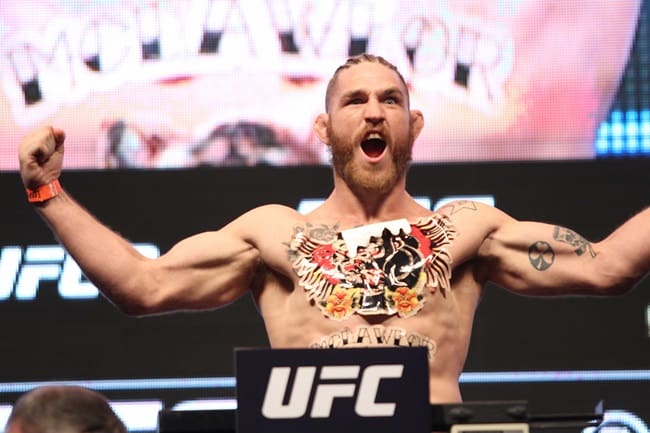 “Filthy” was eligible to return to action in October of 2018. However, the UFC released Lawlor before he had the chance.

Lawlor’s case has been back in the headlines this week due to four UFC fighters being suspended just six months for testing positive for the very same substance, Ostarine.

Hello @usantidoping can you please explain the difference between the 4 recent cases of @ufc fighters being given 6 months for ostarine while I was sanctioned for 2 years? I’d like to believe in fairness by your organization but I would like some clarity please.

USADA responded by admitting Lawlor’s case would likely have been different and he could have challenged his two-year ban. He may have gotten a shorter suspension as a result.

In a statement sent to MMA Fighting on Thursday (April 25, 2019), USADA communications director Adam Woullard wrote that lab testing is “more sensitive and able to detect far smaller quantities and new metabolites of PEDs than even just a few years ago,” which can lead to more “intentional cheats” being caught, but also “some inadvertent positives,” like via supplement contamination.

Woullard wrote that if Lawlor’s ostarine case happened in 2019, it’s possible he would have been eligible for a shorter suspension length and “would have the ability to challenge to an independent arbitrator to determine the final consequence.” But his two-year suspension was the “standard sanction at the time,” Woullard wrote.

“An effective and just anti-doping program should always evolve to best protect clean athletes and to evaluate the facts and science for each individual athlete and fairly sanction intentional dopers,” Woullard wrote. “Today, laboratory testing is more sensitive and able to detect far smaller quantities and new metabolites of PEDs than even just a few years ago, which is great for detecting intentional cheats because of longer detection windows, but on the flip side may also mean some inadvertent positives such as through product contamination are found.”

“While the facts in Lawlor are similar but not necessarily identical to the ostarine cases announced this week, he received the standard sanction at the time for his violation announced in 2017. If his case arose today, he might have been eligible for a lower sanction and would have the ability to challenge to an independent arbitrator to determine the final consequence.”

USADA wrote that “as detection windows increase and the potential time between ingestion and detection lengthens, it has become more difficult for athletes to identify a contaminated product that may be the source of the positive test.”

Lawlor told MMA Fighting on Thursday that he was advised by UFC vice president of athlete health and performance Jeff Novitzky and USADA not to go to arbitration. The reason being a lack of defense. Novitzky claims that was because he wasn’t able to come up with the supplement he took that led to the positive.

“Perhaps the science and testing should be solidified first before people’s livelihoods are put at stake and people are unjustly punished,” Lawlor said.