Before the post-fight press conference for the UFC on FX 2 fight card began it appeared that the focus would most likely be on Martin Kampmann’s come from behind victory and the upcoming UFC Flyweight title bout between Demetrious Johnson and Joseph Benavidez. However that was not to be, as one of the first things that was announced was the fact that there had been a error in the Johnson versus Ian McCall bout and the fight should have been a majority draw, which would have necessitated a sudden death round. Unfortunately the error was detected after the fact and nothing could be done other than schedule a rematch.

-Why did Alves go for the takedown? You could look at Kampmann’s victory in one of two ways, a comeback from Kampmann or a mistake from Alves. Alves had Kampmann hurt and instead of looking for the finish while standing he opted to go for the takedown, which Kampmann immediately reversed and slapped on the guillotine choke.  Should he have kept the fight standing? Was he looking to take the fight to the ground because he thought he could finish it there or was he looking to grind out the last minute on the mat and secure the victory?  Whatever the logic, it didn’t work out.

-What’s next for the fighters?  Kampmann may have punched his ticket to face interim UFC Welterweight Champion Carlos Condit, while Alves may have just saw his name filed under “gatekeeper.”  With no Georges St. Pierre and Condit seemingly reluctant to defend his interim crown it will be interesting to see how the UFC’s Welterweight division shakes out.

– How bad does the scoring error hurt things? Following the UFC on FX 2 card, it looked like fans were going to be treated to the first UFC flyweight title bout, but that hope disappeared when it was announced that there was a scoring issue in the Johnson vs. McCall bout.  Now those two fighters must have a rematch to decide who will face Joseph Benavidez for the title. Even if the two fighters are healthy and do not face any suspensions that fight will probably be months away and then the title fight even further away. So, what does Benavidez do? Does he wait  and remain inactive? Does he take another flyweight fight and if so, what if he loses? The scoring error creates a lot of questions and issues.

– What do you do with a 26-year-old-fighter that has 17 wins and 17 finishes? Daniel Pineda defeated Mackens Semerzier with a first round armbar submission. The victory was his 17th in 24 professional fights and also his 17th stoppage. Pineda has 11 submissions and 6 T/KO’s. The win was his seventh in a row and of those he only made it to the third round on one occasion. Sure, this was only his second UFC bout, but he may be due for a much bigger test in his third bout, just to see what he’s really made of.

-Fight of the Night: I have to give it to the controversy filled Johnson vs. McCall bout. Sure I would have liked to see a fourth round, but the action and the pace that these two delivered in just three rounds was pretty great. It still baffles me that “fans” dismiss the smaller fighters so readily.

-Performance of the Night: I’m going to give this one to Kampmann, he was down on all three cards and exploited an error in Alves’ attack and used that to gain a victory, that he did it while stunned from strikes is even more impressive.

-Finish of the Night: Again, this one goes to Kampmann for the same reasons as above. I could give it to Benavidez, but honestly, did anyone really see that fight ending any other way? 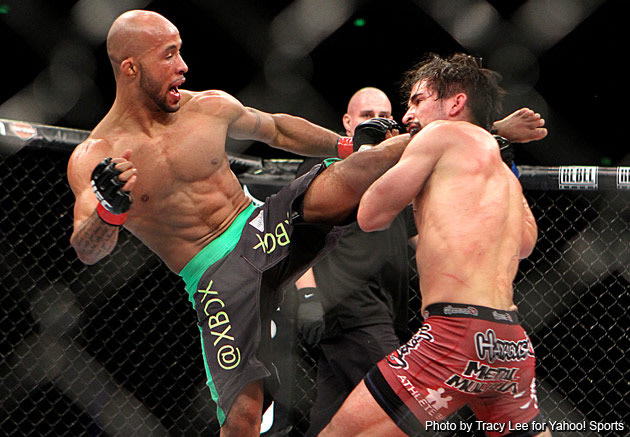