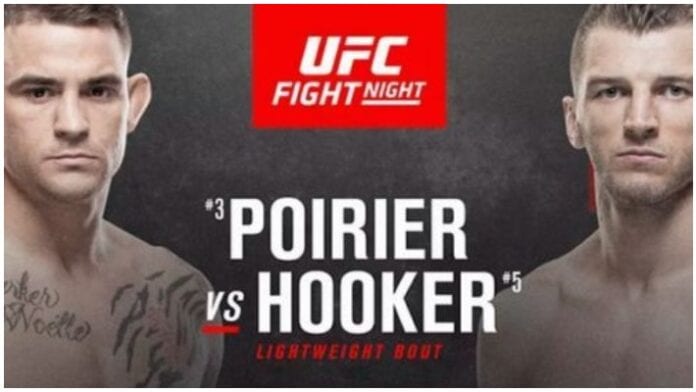 In the UFC on ESPN 12 main event former interim lightweight champion Dustin Poirier returns for the first time since losing against 155lb king Khabib Nurmagomedov. He’ll take on fellow contender Dan Hooker who is currently riding a three-fight win streak and hoping to claim the biggest win of his career against ‘The Diamond’.

Jordan Ellis: I heavily favour Dustin Poirier heading into this fight. He has beat several guys who I believe are better than Dan Hooker. Poirier still appears to be very much at the top of his game despite suffering a lopsided loss against Khabib Nurmagomedov. I expect him to win in a highly entertaining and competitive fight which I cant wait to watch!

Abhinav Kini: I have a sneaky feeling Dustin Hooker will pull off the upset but that aside, it should be a win for Dustin Poirier who is arguably the best fighter Hooker has faced so far. Hooker will be the bigger man but Poirier has the superior striking and ground game to get the finish in a number of ways.

Ryan Galloway: In the main event this weekend between Dan Hooker and Dustin Poirier I am picking Poirier. I think Poirier is going to be the aggressor and put Hooker on the back foot, throw volume and wear him out. If he can watch out for the counter knees I think he has a good chance of beating hooker down and finding a finish in the later rounds of the fight.

Ryan Maccarthy: What a fight this will be, im going to take Dustin Poirier by 4th round TKO. Its hard to pick against a guy where his last 5 fights have been against Khabib, Holloway, Alvarez, Gaethje and Pettis. I mean are you kidding me? Don’t underestimate Dan Hooker though, I expect this to be fight of the night and a potential fight of the year candidate.

Who are you picking to win the UFC on ESPN 12 main event?