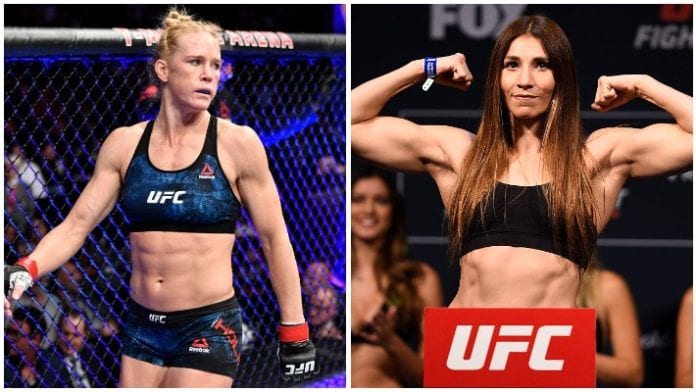 In the second event of this latest ‘Fight Island’ run, we have an intriguing crossroads fight with title implications in the women’s bantamweight division. Former 135lbs queen Holly Holm looks to get another title shot when she takes on rising star Irene Aldana. Who’ll win? Let’s see what the LowKickMMA staff think…

Jordan Ellis: I think this is a really interesting fight but struggle to look past Holly Holm. The former champion has only ever lost to the best of the best. While Irene Aldana is impressive am not yet convinced she is of that level and for that reason I think Holm will do enough to get by the Mexican in this main event.

Abhinav Kini: I believe Irene Aldana will emerge victorious. She has some of the best boxing in women’s MMA and I feel she’s even capable of finishing Holly Holm, especially after an emphatic knockout over the previously undefeated Ketlen Vieira. There’s always a chance of Holm using clinch work and wrestling to grind her way to a decision, but I feel Aldana is more than ready to negate that and come out on top to earn the next shot at the title.

Ryan MacCarthy: This is really a pick em fight, so might not want to bet on this one, but i do really like the odds for this to go to decision. I see Holm taking this one by decsion in what will be a 5 round standup bout. I think it will look extremely similar to Holly’s win over Pennington in January. It will start out with a few seconds of striking, then Holly is going to close the distance and shut her down against the cage. Irene is strong and she’s good, and she’ll try to defend that spot, but I think it will keep going back to that. Holly should take this one.

Karim Nathan: Aldana will come in full of confidence after her last KO victory and might be a bit over confident which is why I think Holm will use her experience and her fight IQ to help her through the fight to ultimately earn a unanimous decision win. This is Aldana’s first 5 rounder and I think Holm will know that and use her clinching and wrestling to wear her out and make it a long night for her and earn the victory.

Ross Markey: Holm and Aldana, for me – stand out as two of the more technical strikers in the bantamweight division, especially with their hands. Holm likes to round off her combinations with kicks, and the movement she utilises to drift in and out of range is almost unmatched at 135-pounds. It’s somewhat of a long layoff for Aldana who last featured opposite Ketlen Vieira in November last, but that performance was nothing short of breakout. With fantastic movement herself and sharp counter boxing against the ultra-aggressive Vieria – Aldana sprung with a massive left hook to score a late first round finish against Pennington, Holm utilised the clinch more often than not, and even displayed her wrestling chaps against upcoming title challenger, Megan Anderson in their featherweight match. Aldana, who’s quite large stature-wise for bantamweight can’t allow herself to get dominated or overwhelmed in the possible clinch exchanges. Holm’s movement and patient counter striking compared to Vieira, may be enough to get her over the line in a decision victory.