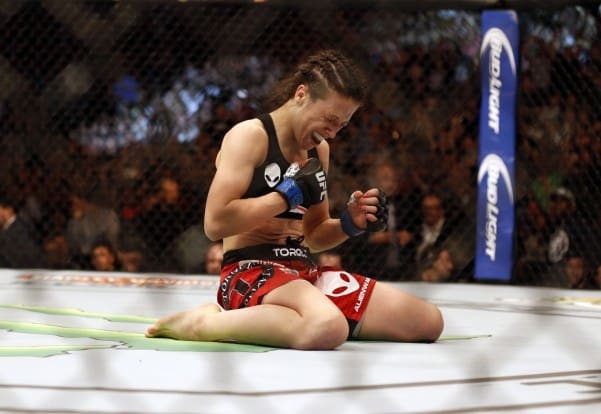 This is a solid main event for the UFC’s latest trip to Germany; in fact, I think as the first title fight aired on Fight Pass, it’s better than the original Alexander Gustafsson vs. Glover Teixeira main event. The key component of the UFC’s growing Polish demographic, Jedrzejczyk could be a star in the making with her quirky personality, glaring confidence, and knockout striking. Her UFC 85 win over Carla Esparza was pure domination, but I don’t think she’ll be quite able to do the same thing to Penne, who’s deserving of the title shot as the No. 3.-ranked former Invicta champion. If she can, we’ll know she’s truly arrived as a star. But I believe Penne’s world-class submission skills could give ‘Joanna Champion’ a run, as I doubt she’ll be going for textbook wrestling-style takedowns as Esparza did. Penne’s best chance to get this fight to the ground will be in a scramble, but in the end, I think the titleholder will simply be too big, too strong, and too good to give up the belt quite yet. I’m taking Jedrzejczyk by fourth round TKO.

Polish women’s UFC strawweight champion Joanna Jedrzejczyk takes on Jessica Penne in the first defense of her title, and I think she may have her hands full with the challenger. Although undefeated at 9-0, the champion has shown many holes in her game, especially in her razor tight split decision win against Claudia Gadelha. The recent form of the former Invicta FC atomweight champion Penne has been top standard, although she too was involved in a very tight decision win over Randa Markos. I expect this to be an ugly and drawn out fight, but my gut is just telling me that Penne has the edge here. It’ll probably be a close one, but I’m picking Jessica Penne to upset the champion and steal the belt by decision.

In the main event, I see primarily a striker vs. grappler bout. A former Muay Thai champion, UFC women’s strawweight champion Joanna Jedrzejczyk may be the very best striker in the division, possessing fluent, crisp combos, and brutal kicks. Jessica Penne, on the other hand, is a Brazilian jiu-jitsu black belt with seven submission wins to her name. However, there’s one problem for the challenger; Jedrzejczyk has outstanding takedown defense. The champion proved this in her last bout against Carla Esparza, stuffing all but one of Esparza’s takedowns, with Esparza being one of the best wrestlers in the division. If the fight does somehow end up on the mat, the champion may be in trouble. However, I see her keeping it on the fight and battering Penne. Jedrzejczyk by second round TKO.

The pressure will be on Siver to bounce back strong in his native Germany after a horrific showing against current title contender Conor McGregor, but it will also be on Kawajiri to perform after a long layoff following his UFC Fight Night 39 loss to Clay Guida. A seasoned veteran, Kawajiri will have the edge if he can get the bout to the ma, but I expect Siver to control th action with his karate and kickboxing background. It should be close, however. In the end, my pick is Siver by unanimous decision.

Siver is coming off a rather gruesome loss to UFC 189 title contender Conor McGregor, and will want to get back to the form that saw him win a thriller against Charles Rosa the fight before. Kawajiri got ground out by Clay Guida in his last outing, so there’s a lot at stake in terms of each man’s fighting future. A fifteen-year veteran of the sport, ‘Crusher’ has a decent blend of grappling and kickboxing to offer, much like his German-Russian counterpart at UFC Fight Night 69. It’s a bit of a toss up in all honesty, but I like Kawajiri in this fight. If it goes to the ground, I think the Shooto star can hold his own, and I expect him to get the better of the striking exchanges. My pick is a decision win for ‘Crusher’.

Siver is returning from a brutal TKO loss at the hands of Conor McGregor to take on the ultra-experienced Kawajiri. I would definitely give Kawajiri the advantage in the grappling department, but overall, I believe that Siver is the better fighter. Siver is undoubtedly the better striker, with a background in kickboxing, and if he can keep the fight standing, I see him taking this one. Siver by unanimous decision.