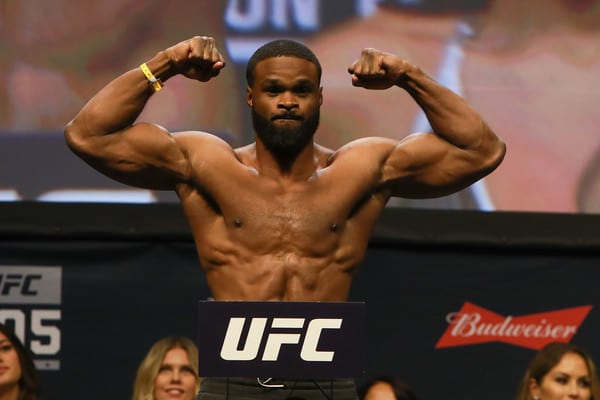 Tyron Woodley’s coach has a theory in regards to the reason that the UFC welterweight champion is not a fan favorite when he competes. It really started all when he won the title after beating Robbie Lawler by KO.

Woodley suffered a partial labrum tear early in his title defense over top contender Demian Maia, which he won by decision, which put him on the shelf. Woodley had been a fighting champion as he has defended it twice in 2017 where he picked up decisions over Stephen Thompson and Maia. This tied with three other fighters for the most active 2017 schedule by a UFC champion.

Then, for the majority of this year, Woodley would continuously state in interviews that he wanted big fights while telling fighters such as Rafael dos Anjos, Colby Covington, and Kamaru Usman to wait a little longer.

He would then return with a submission win over Darren Till in the headliner of UFC 228 to retain his welterweight title.

One of the coaches of the welterweight champion, Din Thomas, recently stated in an interview his theory on why Woodley is not over big with the UFC fanbase.

“I think that people are starting to realize,” Thomas said Monday on The MMA Hour. “Here’s what I think, I’m going to be honest with you, I think that people were just upset with Tyron. I don’t think that they ever didn’t think he could fight. I think they were just upset with him because they know what he’s capable of. I mean, up until the second Stephen ‘Wonderboy’ Thompson fight — Tyron was just tearing people up until that fight. Then those two fights, I think he just disappointed people and they were upset with him, and that’s when they started really badmouthing him. And the fact that he was coming out and just kinda complaining about his position in the game, I think that really just kinda exacerbated everybody’s view of him, and just, ‘You know what, we don’t like this guy.’

“But I think his performance on Saturday and his stance now that, ‘Listen, I don’t care who you put in front of me, I’m just going to fight,’ I think that’s what people want from Tyron and I think that’s what turned everybody’s opinion of him around.”

“It’s always affected him,” Thomas said. “There’s times where we had to take his phone away from him. It affects these guys. These fighters, everybody thinks they’re just these warriors and these animals, but fighters are some of the most sensitive people that you’ll ever see or ever meet, and it affects them. They get out there and they train their tails off and then get in the cage and they fight, they make themselves so vulnerable for the world to see, and then people just take that for granted and start talking trash about them, and it affects them. It affects them heavily.

“But I think now is a time where Tyron has matured, he has evolved as a person and a martial artist. He’s starting to become more mature and say, ‘You know what, this may be a time where I have to just give to the fans what they want, and that’s for me to just shut up and fight.’”

Woodley is expected to make his next title defense against Colby Covington at an event that has yet to be officially announced.