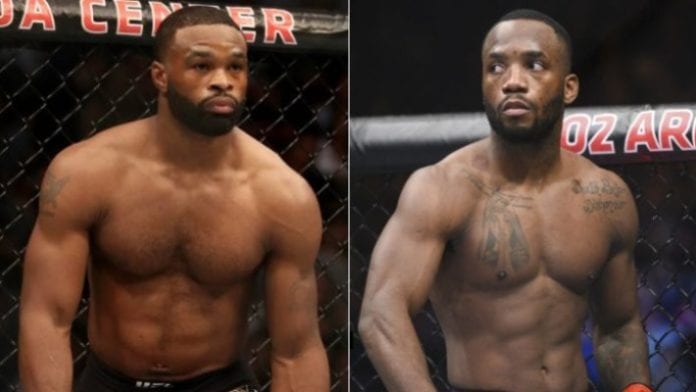 Tyron Woodley continues to be in the spotlight on social media.

The former welterweight champion has been in the headlines recently after going back-and-forth with Israel Adesanya. Woodley has also been calling for fights with Kamaru Usman and Colby Covington as he seems to have little interest in facing his planned UFC London opponent Leon Edwards.

Edwards, meanwhile, believes Woodley is avoiding him by not calling him out to which the latter responded to:

“Can he come to the US?? No! I’m calling out champions, harder match ups and people who are ranked higher. ? why would I call him out? He was always a stepping stone to the throne. End of story”

Edwards would retort back on Wednesday:

Woodley would later go on the offensive by bringing up Edwards’ infamous scuffle with Jorge Masvidal at UFC London last year:

“[Shut] your b*tch ass up ??? Fact is people know you for getting worked (3Pieced) and not your work. Don’t make me pull video when you were all on my nuts”

“Since you are @GamebredFighter ‘s b*tch let me hit him and see if it’s even cool I respond. Groupie ass on here begging like a hoe to fight me. ?”

Edwards responded one last time before deciding he had enough:

“??? you literally just did it again bringing up another mans name. Dont steal my groupie line.. your meant to be the one with the bars.. Your my b*tch old man. Take some time off because social media has not been good for you this past month. Save your Ls for when we fight”

“Ok Im going to bed these so called top ranked fighters make me laugh. things will be different when im champion. take care everyone”

Woodley would then post the link of Edwards’ altercation with Masvidal.

Edwards and Woodley were previously booked to face each other in the UFC London headliner last month before government restrictions due to the ongoing COVID-19 pandemic led to the cancelation of the event.

Do you want to see Woodley face Edwards next? Who wins?