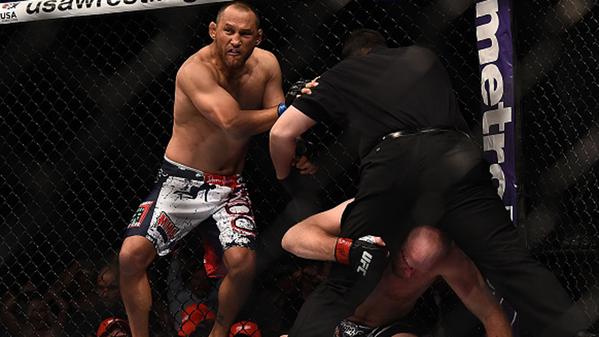 It was a short night of action in the main event of UFC Fight Night 68, as well-travelled MMA (mixed martial arts) legend Dan Henderson made mincemeat of ‘Barbarian’ Tim Boetsch. ‘Hendo’ was able to connect with one of his lethal H-Bombs, and it was all downhill for a wobbled Boetsch from there onwards. Henderson rushed Boetsch for the ugly finish, in what was a message to the ageing veteran’s critics.

Social media has blown up since the main event, check out what Twitter had to say about Dan Henderson’s monstrous KO win over Tim Boetsch:

Well that felt good!! Thanks to everyone for supporting me. Time to celebrate on Bourbon S… http://t.co/K1YIi1ECly pic.twitter.com/VZwNtQ4r0j

WOW! A 44 year old Dan Henderson just crushed Boetsch No TRT in his system, just a bunch of H-Bombs in his system He is our Chuck Norris

Dan Henderson is the man!

At 44, Dan Henderson is officially the oldest fighter in UFC history to earn a knockout inside the octagon. R. Couture held previous record.

44 years old and still a beast. Last thing to go for a fighter is power. Dan Henderson’s #Hbomb does it again. #UFCFightNightNOLA