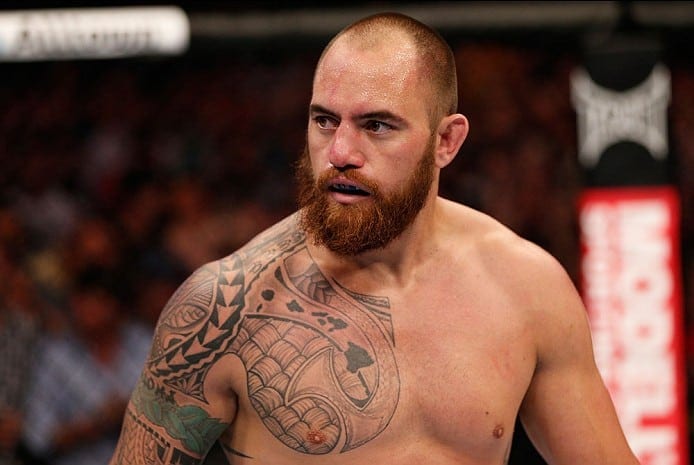 In a heavyweight tilt at UFC Fight Night 81, Travis Browne (18-3-1) looked to rebound from his TKO loss to Andrei Arlovski back in May 2015. Standing in his way was Matt Mitrione (9-5).

“Hapa” earned the win and made Mitrione’s eye look like a balloon in the process.

Mitrione lunged forward looking for a right hand. Browne kept creating distance with his kicks. “Hapa” connected with a knee to the body, followed by a front kick. Browne was dropped by a short left hand, but returned to his feet quickly. A right hand landed for Browne. With about 13 seconds left in the round, Mitirone was poked in the eye and time was called. The action resumed and neither man threw a punch with the remaining time.

Mitirone came out swinging at the start of round two. He tagged Browne with a left. Once again Mitrione was poked, but the referee didn’t immediately call time. The action went on until the referee called brought in the doctors to check on Mitrione. The action resumed again and a kick to the body found its mark for “Hapa.” A left hand landed for Mitrione. Browne got a takedown and looked for an Americana. They returned standing and Mitrione continued to throw wild punches. A knee to the body connected for Browne as the round came to a close.

Browne threw out some front kicks early in the final frame. Mitrione was caught with a straight right hand. “Hapa” slammed his opponent to the canvas and secured full mount. Browne hammered away at Mitrione until the fight was stopped. Mitrione’s eye was a swollen mess.