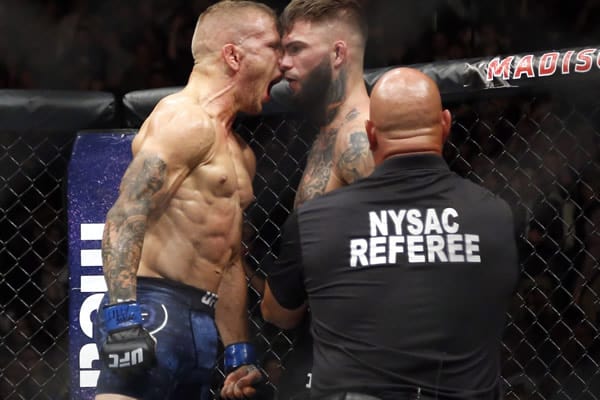 T.J. Dillashaw had some strong words for Cody Garbrandt heading into their bantamweight title rematch at UFC 227.

One of the most anticipated rematches in the 135-pound weight class will serve as the main event for UFC 227 a little over a week from now when Dillashaw defends the bantamweight title against former champion Garbrandt at August 4’s UFC 227 from Los Angeles, California.

Both of these men know each other quite well having trained together side by side at Team Alpha Male for the better part of their careers. That all changed, however, when “Killashaw” decided to move his camp to Colorado and continue working with Duane “Bang” Ludwig, a decision that has splintered more than a friendship.

But it’s also lead to Dillashaw knowing what’s coming from his opponents – or so he claimed:

“You kind of prepare the same for every fight,” Dillashaw told Bloody Elbow. “You add a few tricks to try and keep your opponents guessing, but that’s about it. I love rematches, though. I’ve always done great in rematches. The more I can figure out my opponent the better and I’m going to know Cody like the back of my hand. It’s going to be a good night for me.”

Despite the fact that Dillashaw and Garbrandt have spent countless hours preparing each other for battle in their Team Alpha Male days; the champion believes he is the superior fighter and knows exactly how to beat Garbrandt again:

“He knows I’m the better fighter,” said Dillashaw. “He’ll pump himself up. He’ll talk; that he’s great, that he’s better, and all this stuff, but he knows. He knows the truth. I’m the better all around fighter. I’m the smarter fighter. And this is a bad situation for him, to go right back into a rematch for the title.”

There is no love lost between “No Love” and “The Viper.” Both men have been vocal about their dislike for one another in the media. But Dillashaw doesn’t want to just beat Garbrandt in their rematch at UFC 227, he wants to end his career:

The second chapter in this bantamweight feud will culminate in the main event of UFC 227.