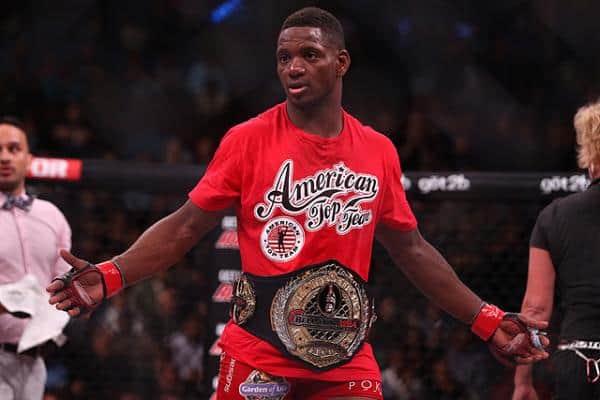 With events from all three of the major mixed martial arts (MMA) promotions, this weekend (April 10-11, 2015) featured a veritable smorgasbord of bouts that showcased the sport’s development and necessity for so many fights in such a short amount of time.

Problem is, all the action didn’t exactly deliver.

Without a UFC title or marquee match-up to highlight the weekend, the overall deluge of bouts wasn’t aided by the fact that many of them seemed to feature a heavy amount of clinching that ended in a decision. While that’s certainly bound to happen in MMA, it also obviously tends to slow down an already lengthy schedule of fight programming.

That’s not to say that the cards were terrible overall, they just didn’t electrify in the sense that would probably be necessary to get anyone but the most hardcore fans to sit through the entire slate of action.

bellator/bellator-136-brooks-vs-jansen-live-results/”>Bellator 136 from Irvine, California, on Friday night wasn’t a horrible card. Lightweight champion Will Brooks defended his belt against Dave Jansen with a well-rounded display of striking coupled with strong MMA wrestling. The only knock on the bout was that Jansen slowed way down after confusing Brooks during an aggressive first round, and then turning mainly into a punching bag for the rest of the bout. The only finish on the main card was Marcin Held’s kneebar of Alexander Sarnavskiy, and the prelims also ended in mainly decisions.

World Series of Fighting (WSOF) 20 from Mashantucket, Connecticut, ran concordantly, and it simply suffered from a bout of bad luck. Melvin Guillard was pulled from the card earlier in the week after trashing the promotion and failing to submit his necessary medicals, and the card got even worse when main event participant Ronny Markes was forced off the card after being hospitalized prior to the weigh-ins.

David Branch easily beat late replacement Jesse McElligott in the main event to advance to the light heavyweight tournaments finals against Teddy Holder, but overall the card was lacking.

Finally, the UFC made its Polish debut at UFC Fight Night 64 from the Krakow Arena in Krakow, Poland. The Polish fighters on the Fight Pass-aired card didn’t fair so well, going 2-5 overall and not giving the hometown fans much to cheer about. Neither did the card overall for the most part, so thankfully a few select fighters stepped up and saved it a bit.

Except for Leon Edwards thrilling eight-second knockout of Seth Baczynski, Maryna Moroz’s shocking upset of Joanne Calderwood, and Mirko Cro Cop’s violent comeback win over Gabriel Gonzaga in the main event, the card had seven decisions that were brutal to watch at points.

All of those factors lead to a combination of fights that weren’t the worst ever, but certainly weren’t the most exciting, either. It was definitely an example of how big MMA has gotten, but too many overstuffed weekends like this could definitely take away from the sport’s popularity. The time-honored debate about oversaturation in MMA will rage on.

What did you think about all of this weekend’s action? Did you even tune in, and if so, to how much?