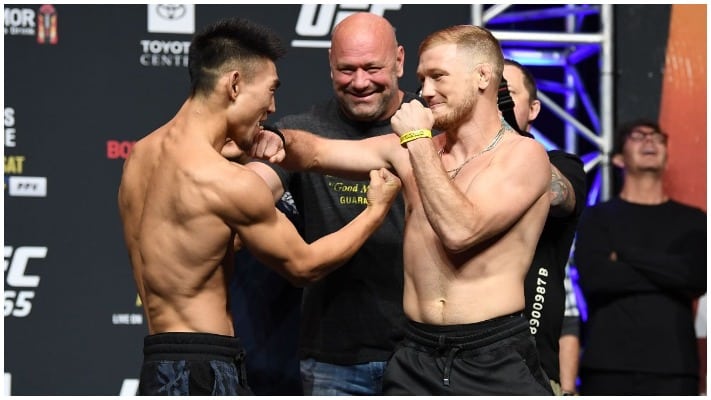 Opening up the UFC 265 main card we have an exciting bantamweight match-up between Song Yadong and Casey Kenney.

Round 1: Song Yadong lands a body kick early. Casey Kenney is pushing forward a lot but is unable to land anything meaningful through the first minute of this fight. Kenney taunts his opponent but eats a heavy leg kick. Yadong jumps in with a hook but is countered well. Yadong is doing good work with his lead left hand in this opening round. The Chinese fighter throws a kick but slips and ends up on his back. Kenney jumps onto his opponent and tries to lock up the head. Yadong does well to escape and pop back to his feet. Both men continue to exchange techniques right up until the horn sounds to end round one.

Round 2: Kenney lands a calf kick at the start of round two. Yadong targets the body early in the second stanza. Kenney is pushing forward a lot in this round, he is always throwing something to keep his opponent guessing. Yadong is doing well on his back foot but this is not something we’ve seen often, if at all, during his relatively short UFC career. Both men are really throwing to finish but more often than not they are unable to land cleanly. Kenney tries to take it to the mat but Yadong easily shakes it off. They exchanges kicks. Kenney cracks his opponent with a straight left. And another! Kenney is starting to get some momentum and Yadong realizes that when he shoots in for a takedown. Kenney is able to shake it off and not a lot happens before round two comes to a close.

Round 3: Kenney continues to push forward but Yadong makes him pay with a counter left. Kenney lands a punch of his own and follows it up with a kick. Straight right hand for Yadong. Yadong is finding success on the feet now. Kenney lands a knee but it doesn’t seem to bother his opponent. Two minutes are left on the clock and Kenney dives at Yadong’s feet and is easily shrugged off. Yadong jabs, Kenney counters, Yadong kicks. This is such a well-matched fight. Yadong presses forward with a flurry of punches. 30 seconds left and they are letting it all hang out. In the final 10 seconds, Kenney secures a takedown and ends the fight on top, dropping elbows.