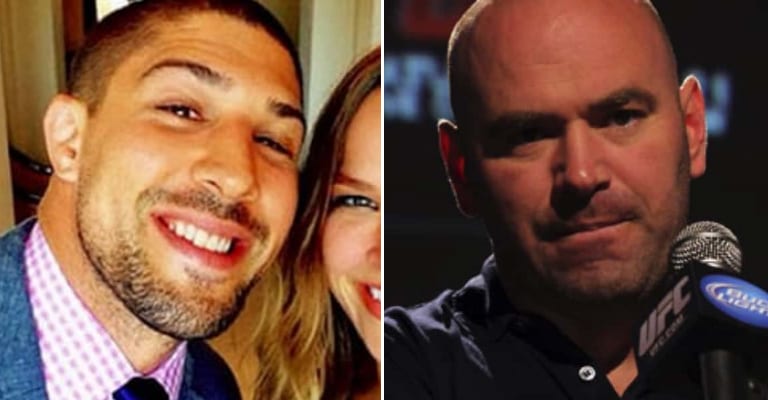 The feud centered on UFC middleweight Israel Adesanya’s interpretation of Schaub’s recent assessment that high-level kickboxers rarely made a seamless transition to MMA, something that the rising

“Last Stylebender” took offense to on his personal Instagram. Schaub later clarified that he was talking about kickboxing legend Gokhan Saki, who was knocked out at last week’s UFC 226, but not before White intervened and went off on Schaub’s own credentials:

“Such a (expletive) tool!!!! What the (expletive) does this idiot know about the sport or the business??? @stylebender for u to be listening to one word from this MORON is a waste of ur time. Guy went 6-5 in the UFC!!! The only thing he could teach u is how to get KO’d. Tune idiots like this OUT.”

White was met with a comment from a fan that focused on Schaub’s verifiable success as a podcast host and stand-up comedian, to which White suggested was only because of his friendship with Joe Rogan:

Apparently, Schaub had enough of White’s callout, as he issued an incendiary reply that went off on White’s so-called inability to run the UFC without his onetime partners the Fertitta brothers – something that may be coming true as UFC ratings and pay-per-view buys continue to slump. “Big Brown” focused on the UFC’s current attempts to regain mainstream success by booking fighters like CM Punk and Brock Lesnar as another sign White couldn’t do his job without Frank and Lorenzo:

The ‘eskimo brothers’ dig at the end of the flame-worthy post has the Internet ablaze based on the assumption that White also had sex with Schaub’s ex-girlfriend, Ronda Rousey.

While that’s quite the assumption with no evidence to back it up as of now, it’s safe to say Schaub is fired up and speaking his true feelings about White – many of which may hold at least some degree of truth as the UFC keeps struggling.

Regardless, the gloves are off, so don’t expect this to be the last update in this developing rivalry. Stay tuned fight fans.