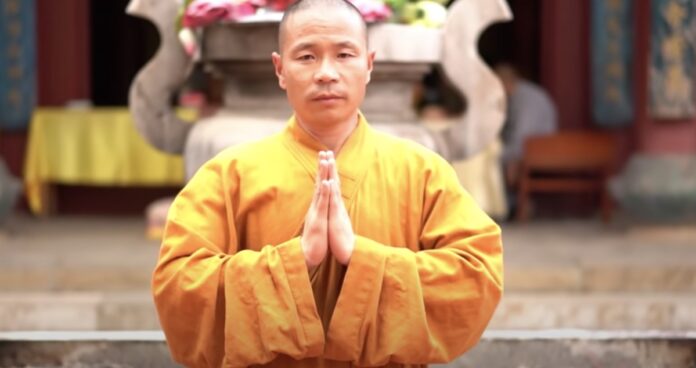 The Shaolin monks are one of the most legendary figures in all of martial arts. Their story goes back over a thousand years and they’re still romanticized to this day.

Here is the story of the Shaolin monks and how they became legends. We’ll start with how the Shaolin temple was formed and how the monks of Shaolin developed their style of Kung Fu.

Then we’ll detail they’re training and list fighters that have trained with them.

The history of the Shaolin monks

To tell the full story of the Shaolin monks, we have to go back over 1500 years. The Shaolin Monastery was first built in 495 AD and is located within the Song Mountains in the Henan province.

From the beginning of the monastery’s history, there have been monks that served there with exceptional martial arts skills.

Buddhabhradra was the first abbot of the monastery that was originally from southern India. He had two disciples that were quite skilled in martial arts in Sengchou and Huiguang. Sengchou was actually a master staff practitioner.

After Buddhabhradra, the monastery was taken over by Bodidharma in 527 AD. He had also had a disciple that was a martial artist in Huike.

Senhchou, Huiguang, and Huike may have been in the military of one of the Chinese dynasties, but there’s no records.

When Bodhidharma arrived at the Shaolin monastery, he saw that the monks were in horrible condition and had a poor diet. Bodhidharma was appalled at how the so-called holy men took care of themselves.

This led him to put the early Shaolin monks on a strict training and diet regimen. He believed that being disciplined in one’s health would lead to a higher sense of enlightenment.

The legend is that Bodhidharma was the originator of Shaolin Kung Fu. Allegedly teaching early Shaolin monks different exercises that would develop into Shaolin Kung Fu.

There is no historical evidence of this, but those exercises would evolve into a combat form. This combat form is known as “Luohan’s 18 Hands” and is the oldest documented form of Shaolin Kung Fu.

Originally this form practiced by Shaolin monks consisted of 18 simple movements. As time went on, more moves were added to the system, which would create variations of Shaolin Kung Fu.

The Shaolin monks do battle

Believe it or not, the Shaolin monks actually did participate in a battle early on in their history. A stele in the monastery that dates back to 728 tells of two instances of the Shaolin monks going to battle.

These events happened in 610 and 621. The first event in 610 was an event, where the monks successfully defended the monastery against raiding bandits.

Then in 621, they actually participated in the Battle of Hulao against General Wang Shichong. Schichong declared himself emperor and took control of an area called Zheng near Mount Huanyuan, where the monastery is located.

This area included a strategic house called the Cypress Valley Estate, which once served as a fort.

Sui Emperor Wan had given some of this land near the mountain to the Shaolin monks that Wang had taken. Wang would actually march towards the monastery.

During the 16th century, the Shaolin monks had been practicing martial arts for over a century. It was so ingrained in the monastery that monks had written the martial arts training into Buddhist lore.

The lore was included in numerous literary genres that romanticized their training. Most notably one of the earliest training manuals called “Shaolin kung fu: The Exposition of the Original Shaolin Staff Method.

Written by Cheng Zongyou in 1610, who spent more than 10 years training at the monastery. The book was published in 1621.

This is one of the most constantly asked questions about the Shaolin monks. Why does a sect of Shaolin monks practice martial arts?

Bodhidharma, who created Zen Buddhism instilled the importance of keeping one’s body in shape. By practicing martial arts, the Shaolin monks are able to improve their discipline, focus, concentration, will power, and self confidence.

This will allow them to experience life in a richer form and be able to aim higher mentally.

What does Shaolin Kung Fu consist of?

The style of Kung Fu that the monks trained consists of various forms. Their style can be akin to a very early form of MMA along with weapons training.

Along with their hand to hand training, the Shaolin monks were also known for being versed in many different weapons. Here are some of the more common weapons trained by the monks.

A Shaolin monk’s training regimen consists of 10-12 hours of training every day. Consisting of stretching, conditioning, and drilling.

Shaolin monks are known for their extreme flexibility that is constantly demonstrated on numerous videos.

From a young age, monks are instilled with the importance of stretching. Going through methodical routines everyday that some would say are extreme to say the least.

They will hold stances for hours at a time and force themselves into the spits using ropes. Much like Jean-Claude Van Damme did in the movie Bloodsport.

Shaolin monks are also known for their brutal conditioning routines. Every morning, they must run up and down the monastery steps on all fours followed by numerous calisthenics.

They will also work on their strength and balance by holding fighting positions as they balance a staff on their arms.

After going through their stretching and conditioning routines, the monks go into technical training. They will drill different movements thousands of times for hours until the moves are perfect.

The Shaolin monks actually have two different uniforms. Their normal robes are called a kayasa and their training uniform is called a yi-fu.

Their training uniforms are generally gray shirts and pants made of light fabric and designed for their training. Bindings are worn around the legs and they wear cloth shoes.

At what age do Shaolin monks begin their training?

Early on, it was normal for kids at the monastery to start training between the ages of 3 and 4. Today, a person of any age can train with them, but you still have to be accepted into the monastery in order to train.

Do you have to be a monk to train Shaolin Kung Fu?

No, not anymore. If you are accepted into the monastery, you can train along with the Shaolin monks without having to be one.

Do other monks practice martial arts?

Have pro fighters trained with the Shaolin monks?

He recounts that the training was brutal and would routinely last 10 hours a day. Repeated the same movements over and over until they were perfect from sunrise to sunset.

Hardy actually detailed how he made his sifu teach him to use a sword on Instagram a few years back.