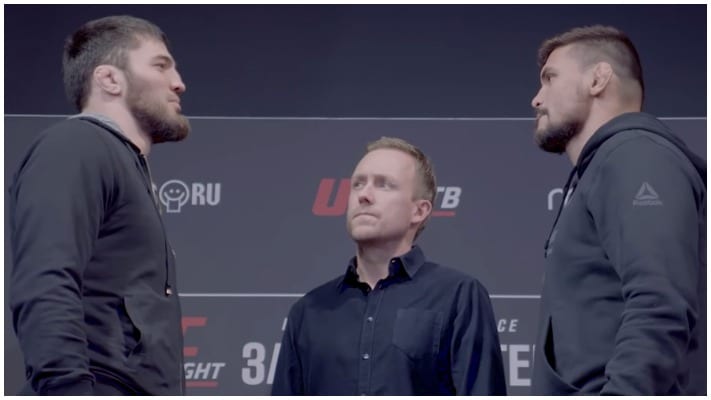 Opening up the UFC Moscow main card is a light heavyweight bout between Shamil Gamzatov and Klidson Abreu.

Round 1: Abreu is the one advancing more. Both fighters start with body kicks. Abreu tries a flying knee but misses. Gamzatov responds with a straight right. Abreu blocks a head kick and sees his own head kick blocked soon after. Abreu has been checking a number of leg kicks. Not a lot of significant action in the first round but probably one that goes to Abreu.

Round 2: Gamzatov goes for a teep kick. They seem to swinging more but no strike so far that has hurt the other. Abreu lands a significant right. He lands a nice combo which ends with a leg kick. However, it’s Gamzatov with more kicks landed. Gamzatov is pressuring more but the action goes back to the center of the Octagon. They clinch up before Abreu trips him and is now on top. Gamzatov gets up by pushing his legs off Abreu’s hips and the round ends.

Round 3: Abreu is a bit slower coming into this round. Lots of feinting and blocked leg kicks in the third stanza. Gamzatov lands a nice right and is advancing more as Abreu is on his bike. He lands another shot that gets the crowd’s reaction. Gamzatov is clearly more confident and active now. Gamzatov attempts a spinning back kick but has his back taken by Abreu and they eventually clinch up. Gamzatov reverses and attempts a takedown but eventually gives up as they separate. Abreu attempts a takedown but it’s stuffed. The fight ends.