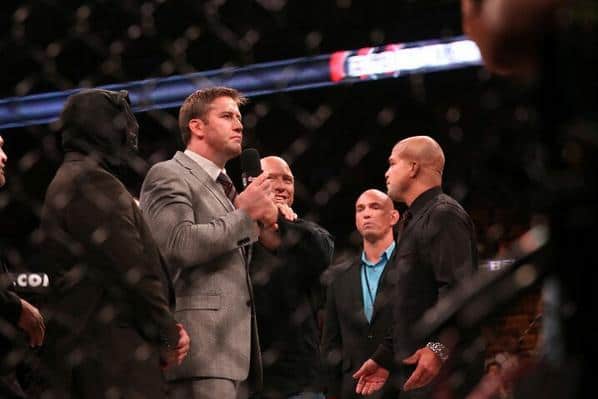 Bellator 123 played host to quite possibly the strangest sequence of events in MMA history. In case you missed it, you can watch it here. The skinny is that former UFC fighters Stephen Bonnar and Tito Ortiz had a WWE-style showdown in the Bellator cage, accompanied by a masked man that turned out to be ‘flushed turd’ Justin McCully, right before “Brawling” with each other.

The embarrassing encounter had fans cringing worldwide, and questioning CEO Scott Coker‘s motives for the blatantly staged fiasco. Well, according to an interview with MMAJunkie.com, the new CEO of Bellator had no idea that the two UFC veterans were going to throw down:

“Spike didn’t know, we didn’t know, and after the fight, I was sitting and watching Tito, and he was pissed off and mad for a good hour after that altercation. So as fake or as pro wrestling as it might seem, there’s some deep-seeded something going on over there. Really, I don’t even know what that’s about between McCully and Tito.”

I struggle to find words to describe Coker right now, as this whole affair was more staged than any pro-wrestling show I’ve heard about. Still, let’s hear the man out. He continues:

“To me, it’s like when Chael Sonnen does his wrestling bits. It’s very, ‘Now they’re going into the WWE business.’ It’s just how some of these guys choose to express themselves. I think Stephan had his script ready, but I don’t think Tito had his script ready because having Justin there threw him off. But at the end of the day, that’s something that happened one time. … But I’ll tell you this: The fight that’s going to happen in the cage on Nov. 15 is going to be real. All that stuff’s going to be put to the side, and they’re going to be locked in the cage, and they’re going to have to fight. But we are not going into the pro wrestling business. We’re not part of the TNA landscape, and we’re not part of Spike’s plan. It’s something that took us all by surprise.”

Wow, this is just painful to hear. In my opinion, Bellator just really did themselves over with the brawl between Ortiz and Bonnar. Indeed, the entire Bellator 123 card was overshadowed by the Ortiz-Bonnar Brawl, and it was actually a decent card. Nonetheless, Coker swears on the grave of his father that the brawl wasn’t staged:

“It was bad, but it happened, and it is what it is. I understand why the fans are confused, but this is something that wasn’t pre-planned on our part. It was really between Tito and Stephan. What happens in the cage on the 15th, there’s not going to be any pro wrestling. It’s going to be a real fight.”

So the Bellator CEO has laid it on the table; he is either a truth-telling saint of a man, or a promoter that knows he f*cked up with his latest plot to gain media attention, and doesn’t want anybody pointing the finger at him. Thoughts?