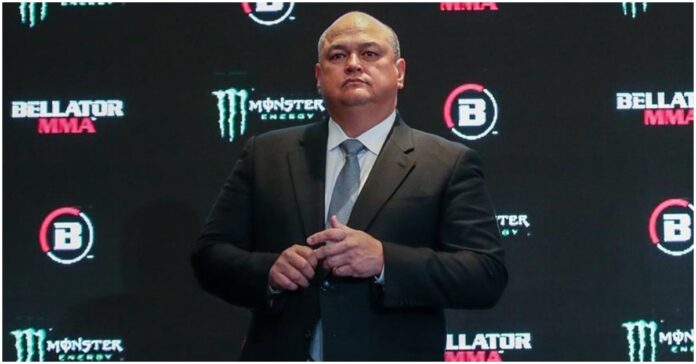 Ngannou was paid just $600,000 for his latest fight, a unanimous decision win over Ciryl Gane at UFC 270. The fight was the last on Ngannou’s current contract, which has been extended due to a championship clause in the deal that ties ‘The Predator’ to the UFC for one year or three fights – whatever comes first.

The Cameroonian knockout artist has often expressed his desire to pursue big boxing fights and wants the freedom to do so before re-signing with the UFC.

WBC heavyweight champion Tyson Fury is ready to welcome Ngannou to the squared circle. ‘The Gypsy King’ says he will square off against the UFC heavyweight king in the first quarter of 2023.

In the aftermath of Bellator 274, Coker spoke with the media and was asked if wanted to bring Ngannou to his promotion.

“We haven’t talked to him because he’s still under contract, he still has championship fights but if he’s a free agent one day and you know the timing’s right, we feel it’s a good fit and you know we’ll decide that time,” Coker said. “The philosophy is still the same, look, if you’re a free agent and you want to come shop your wares and your brand and your business, come talk to us because we are in the business of signing the biggest and the best free agents on the planet.” (Transcribed by Sportskeeda)

Do you think Scott Coker could convince Francis Ngannou to join Bellator?